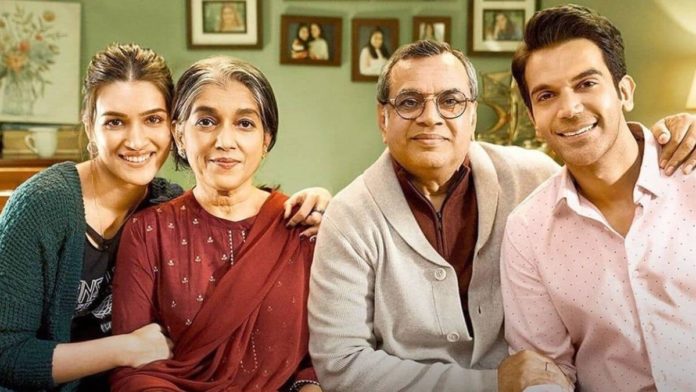 'Hum Do Hamare Do' is a comedy-drama film starring Rajkummar Rao, Kriti Sanon, Paresh Rawal and Ratna Pathak Shah in lead roles. The film premieres on Disney+Hotstar on 29 Oct 2021.

Remember those old Hindi movies where the hero/heroine would be hauled up in school and fake parents would be hired to face a principal without ire? Or movies where random people posed as parents of a boy before a girl’s family or vice versa? Once upon a time that was considered comic confusion to keep a romance going.

Director Abhishek Jain actually plucks his story from those films. He and Prashant Jha (screenplay and dialogues) then proceed to make a mirthless comedy in an age where communication has made background checks as easy as a nursery class maths paper.

An orphan who yearns to have a family, christens himself Dhruv (Rajkummar Rao), grows up into an app developer and falls in love with blogger Aanya (Kriti Sanon). Like Aamir Khan who saw Asin with kids in Gajini and promptly melted, Aanya flips for Dhruv who teaches kids as a pastime.

After a routine misunderstanding that turns into love, Aanya tells Dhruv that her one dream has been to have a family and a little puppy. The orphan who actually has no reason to lie, fibs about a make-believe family.

You know, he makes apps, she’s a blogger with 1 million followers. But hey, Aanya doesn’t even check on the guy’s credentials or look for photographs of his ‘family’ on social media.

And so you hark back to the unfunny past where the hired family and the big fib are supposed to be uproarious.

A few tolerable moments are Dhruv’s novel way of proposing to Aanya and much later, a ‘tava garam’ line that’s quickly turned into a dance.

But with dialogues that rhyme ‘whisky’, ‘uski’, ‘kiski’ and ‘risky’, and some terrible humour over a toothpick, the comedy sinks.

When a film falls flat, there’s plenty of time to think about what’s gone wrong with it.

First, the idea of people posing as parents is an overused item that’s solely intended to create comic chaos. Next, why Dhruv had to lie and carry it so far is unconvincing. Third, Aanya’s obsession with wanting a family is unfathomable. Because all through, she has an authentic family that cossets and cares for her. Even if that’s her uncle, aunt and cousin, and not her real parents, it’s a loving family and she’s no deprived soul. It would be understandable to mourn and miss her dead parents but why would she yearn for her husband’s family when her uncle and aunt have provided her with all that she’s looking for?

However, this isn’t the sort of film where one should ask questions since most of it is inane. Apart from plastic parents Dipti Kashyap (Ratna Pathak Shah) and Puroshottam Mishra (Paresh Rawal), and a back story for the oldies too, Dhruv goes the whole hog with a busload of ‘relatives’ for the engagement/wedding.

The background score is overloud and Sachin-Jigar come up with tired Punjabi tunes as the big fat fake wedding ends as it has to with Dhruv exposed.

But there will be a happy ‘family’ gathering at the end of it.

With Abhishek Jain not getting even one new expression or note out of Rajkummar Rao or Kriti Sanon, you can’t help but feel that the talented Rajkummar deserved better. Oh, there’s Aparshakti Khurana too in the cast but don’t ask me what he was doing there.

Instead of this really weary family scene, it would have been easier for Dhruv to get Aanya a puppy. At least that would’ve been cute.