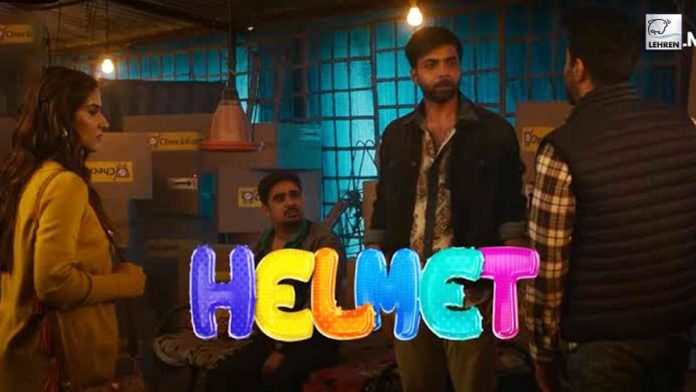 Akshay Kumar can sell sanitary pads and toilets. But C-O-N-D-O-M is a six-letter dirty word in India.

When volunteers from an NGO go into a small town in UP for a survey on the dirty word, they’re beaten up. How dare you utter the word in public?

Customers, including orphan Lucky (Aparshakti Khurana), a wedding band singer, would rather pick up a bagful of unnecessary toiletries than utter the word in front of the pharmacist.

Lucky also strikes it unlucky with girlfriend Rupali (Pranutan Bahl) whose rich dad (Ashish Vidhyarti) won’t entertain him. Add to that cobweb-covered plot a rich MBA from the US that the dad has picked for Rupali and desperate Lucky, along with two sidekicks (Abhishek Banerjee, Ashish Verma), robs a truckful of Checkkart cartons.

Turns out that instead of get-rich-quick mobile phones, Lucky has stolen a roomful of condoms.

How do you sell stuff that comes in different flavours to a town that’s so condom-shy?

Lucky’s ‘Eureka’ moment comes with the discovery that everybody actually wants a condom but seeks anonymity to buy it. So voila, Lucky hides behind a helmet and goes hey, psst, wanna buy? The rubber takes off like hot cakes.

Try and explain why it’s the seller and not the bashful buyer who has to hide his identity and it’s like cracking the Mayan script. Talking of scripts, ‘helmet’ is synonymous with ‘safeguard, ‘shield’ etc. Get how clever the title is?

Director Satram Ramani and two more writers (Gopal Mudhane, Rohan Shankar) peddle the noble thought on birth control being the need of the hour for a country that’s bursting at its seams with its teeming population. They even bring in the Prime Minister’s speech on controlling the growing figures.

But can a social comment make an impact when Aparshakti Khurana is hopelessly unacceptable as a singing-dancing-romantic hero? Can it be watchable when the writing, the making and practically all scenes are as dull as lead and as pointless as counting sand grains on the beach? Does a sidekick calling the goods ‘balloons’ or Rupali eating a banana suggestively make the condom-sale mirthful or meaningful?

The only positive one can see is that Dino Morea (who produces this film) is beginning to make his presence felt – whether he’s in a guest appearance in Helmet or as the antagonist in The Empire.