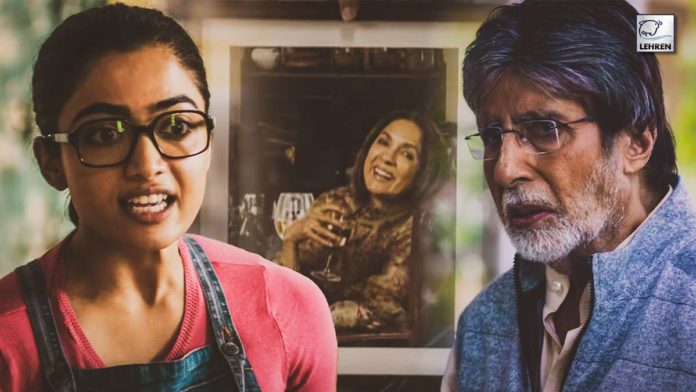 Thumbnail storyline: Lawyer Tara Patel (Rashmika Mandanna) has just won her first case and it’s time to down those shots and party. Never mind if the phone’s been ringing all night. It’s only dad. By the time all the biological and adopted kids, each in different situations in assorted parts of the world, wake up to learn that mom Gayatri (Neena Gupta) has suddenly passed on and they begin to gather at the family home in Chandigarh, dad Harish Bhalla (Amitabh Bachchan) has been grappling with the tragedy on his own.

With logic locking heads with religious practice and work obsessions walking alongside a mother’s funeral, it’s outsiders like family friend PP Singh (Ashish Vidyarthi) who decide the traditions and rituals with which Gayatri should be sent off.

Until the disparate members come slowly together as a family and learn to mourn together.

In the mould of Ramprasad Ki Tehrvi, writer-director Vikas Bahl sprinkles black humour around the body that’s lying inert on blocks of ice with cotton wool up its nose. Before a torrent of emotions lash around, drawing more a tear from the viewer. And, without any chaos or confusion, Vikas recreates magical familial moments with the use of fleeting flashbacks that come in no particular order, even going back to the time Harish wooed and wed Gayatri. Sweet.

A couple of impressions stay on. One, writer-director Vikas Bahl is a filmmaker I’d like to keep track of for the variety he’s been dabbling in. Queen, Super 30 and a teary family farewell to Gayatri make an interesting resume.

Two, Amitabh Bachchan, poised to turn 80, just never takes it casually. He’s so completely the freshly widowed Harish Bhalla whose mind has been temporarily paused that you can’t help but applaud him. It’s the whole nine yards and more. Bashful moments as a young man wooing the neighbourhood girl, happy times like the arrival of Stupid, their cuddlesome Labrador, tense confrontations especially with ‘woke’ daughter Tara, exasperation over a son’s continuous work mode which is conveyed with only a reproving eye, and the fresh wounds of widowerhood. Vikas Bahl creates a whole thali of emotions and Amitabh Bachchan dives right into it, relishing every morsel with the enthusiasm of a newcomer.

It’s not just about using his baritone for a beautiful monologue around Gayatri’s kalash (copper urn) before he drops her ashes into the river. Watch Bachchan in those silent shots standing around while her body is shifted and then moved out. It’s as if his heart’s weeping inside.

Another impactful presence is registered by Pushpa actress Rashmika Mandanna. She makes her debut in Hindi cinema in a feisty role where she jousts with Amitabh Bachchan and never for a moment gets dwarfed by the imposing veteran before her.

It’s also Neena Gupta’s day to bask in the sunlight. The actress who never did make it to the grade of Amitabh Bachchan’s heroine in her earlier years brings a warmth to the screen every time Bahl flashes back to the family she nurtured.

The writer gets an extra pat for also weaving in so seamlessly the presence of a sardar boy as one of the kids in the Punjabi family.

But there are flaws too. The pace for one which asks for patience, some extraneous scenes that could’ve been chopped off and the switch-on, switch-off jerkiness where Bahl juggles with comedy and emotion.

Also, when Vikas introduces Tara’s live-in partner Mudassar early in the script, you brace yourself for the Hindi cinema staple of Hindu ‘bigotry’ and the director doesn’t let you down. There is a passing shot where Mudassar offers his shoulder for the bier and ‘bigots’ promptly frown at it. Weird that it was forced in because the boyfriend wasn’t even supposed to be there, the same guy had earlier decided quite sensibly that he’d stay out of this delicate family moment.

Then there’s the scene in the car which makes you wonder, why would Tara put her boyfriend’s call on speaker mode when there’s still awkwardness lingering around the relationship? Or why would a sensible grownup like Harish Bhalla knock on his married son’s door in the middle of the night and give him a lecture on making out with his wife?

On the other hand, my initial misgiving that Sunil Grover as the panditji would turn it into a farcical Kapil Sharma show of rituals was entirely misplaced. In fact, Vikas Bahl has used the actor well to handle cynicism with calm before bringing about some enlightened balance especially in Tara.

Apart from Amitabh Bachchan’s performance and scenes that activate the tear glands, Amit Trivedi’s ‘Jaikaal Mahakaal’ is uplifting and ‘One hic’ works as a party number.Goodbye is a healthy family watch.