The Fame Game Review: The Same, The Lame & The Tame 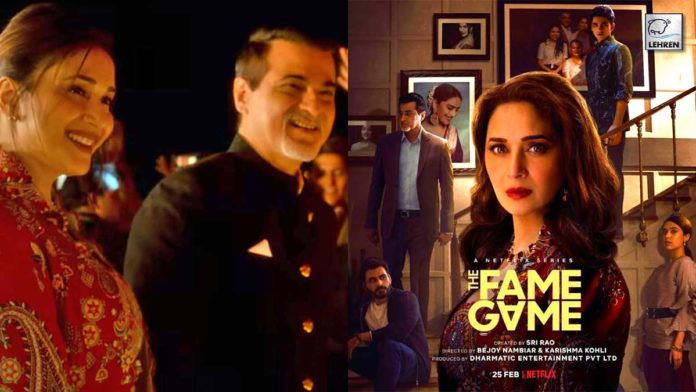 The Fame Game is a suspenseful family drama series starring Madhuri Dixit Nene, Sanjay Kapoor, Manav Kaul, and Rajshri Deshpande. It is directed by Karishma Kohli, and Bejoy Nambiar and produced by Karan Johar. The series is now streaming on Netflix.

The Hindi film industry carries a chip on its shoulder that outsiders tend to gawk at it like a bunch of dysfunctional people inhabit it.

And then the same industry puts together a show which further shames itself by coming off as a land of self-absorbed users and abusers.

Fans couched as critics may go as orgasmic as they want. Yes, we like Madhuri Dixit too. But whatever happened to director Bejoy Nambiar who normally treads his own cinematic path? Between Bejoy and Karishma who helm the episodes and writer Sri Rao, eight annoying episodes go back and forth between superstar of 30 years and mother of two adult children, Anamika Anand (Madhuri Dixit) who goes missing, and the flashback story of simple Vijju Joshi, the reluctant actress who became Anamika Anand, the best-selling heroine of Hindi cinema. The celebrity who aspires to be the best mother ever. Underline that last line.

The story and screenplay carry the burden of a must-have list that Netflix and the producers seem to have placed before themselves.

Two overdone must-haves are: one, a cop with a sixth sense who’s constantly overruled by a superior who’s in a hurry to close the file, never mind who’s hanged in the bargain. And two, a few gay scenes in a laboured effort to normalize homosexuality. This time around, Sri Rao has both genders represented. A star son who’s gay and a female ACP battling a divorce and custody case alongside her lesbian partner.

Apart from staccato scenes like the one between Nikhil and a financier, lost in the need to tick off all that’s on the list are glaringly unsolved sequences, a non-linear narrative, and a general disconnect with normalcy.

Take for instance how the film world is viewed. There’s either Madhav (Gagan Arora), a maniacally besotted fan who tattoos Anamika’s name on his back or there’s unsmiling ACP Shobha Trivedi (Rajshri Deshpande) with a hatred for all things Bollywood. And there’s the alleged crime scene, a famous star’s household beseeched by a curious media and much security but a stranger can roam around the rooms unchecked.

The plot in short. After a 20-year gap, Anamika’s back with her ex-lover and favorite co-star Manish Khanna (Manav Kaul), in a film produced by her husband Nikhil More (Sanjay Kapoor). Against a backdrop of financial woes, Anamika goes missing.

The rekindling of an old love story is handled antiseptically and in the back and forth telling, loses even the sparks and tenderness that romance requires. Perhaps an explanation will be sprung when the next season streams.

By the end of the first episode, you know that Anamika’s alive with a misleading, ‘How long are you going to keep me here?’ dangled like a hook.

Anamika’s son Avi (Lakshvir Saran) and daughter Amu (Muskkaan Jaferi) who live in the comfort provided by her stardom are like two ungrateful young adults with boulders on their shoulders about living with a famous mother. Why Anamika silently continues to let her insensitive mother (Suhasini Mulay playing the pushy star mother) demoralise Amu, gang up with abusive husband Nikhil and rule the house, has no answers. Why two people are bumped off in an elaborate plan doesn’t get answered with satisfying closure.

Can’t say more since it’s supposed to be a thriller.

So let’s just say, we do like Madhuri a lot. She aces her act as Anamika in all her colours, soft and harsh.

As for the feeling of dissatisfaction, that’s why platforms have seasons. So all that hangs unexplained gets unknotted the next time around.

However, a good show should leave one feeling fulfilled and wanting more. This one doesn’t.