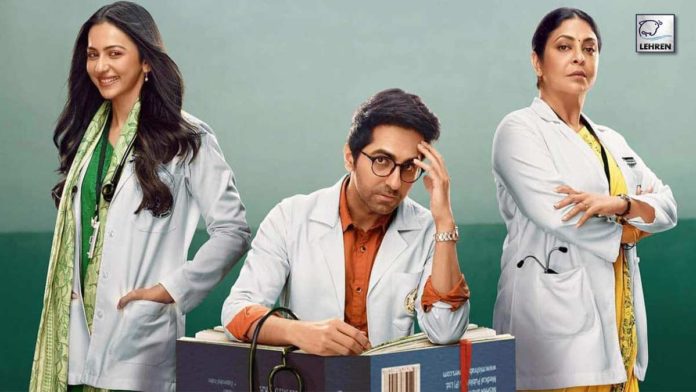 Doctor G is a comedy-drama film featuring Ayushmann Khurrana, Rakul Preet Singh and Shefali Shah. It is directed by Anubhuti Kashyap and produced by Junglee Pictures.

Does anybody know where this medical college and hospital exists?

Where it’s believed that “gynae” is only for “ladkis”?

Where male students don’t study gynaecology and the “gynae” department has only girls?

It has to be only the “manly” field of orthopedics for Dr Uday Gupta (Ayushmann Khurrana) and not gynaecology because how can a man treat something that he doesn’t have?  This house of brilliant logic drips with more of the same as four writers (Saurabh Bharat, Anubhuti Kashyap, Vishal Wagh, Sumit Saxena) and one director Anubhuti Kashyap muddle into a non-existent medical world. The only male in the classroom is ragged by the girls and every time he’s chumped, there are pop-ups on the screen which read, “Uday Googly” and “Uday Stree Rog”, with a peppy background score to remind you that you’re watching a comedy.

A pregnant patient who is scared of injections is ticked off by the doctor who retorts, “What about your husband’s big one?” Another whose husband is clueless about intercourse is told that he’s been entering the “galat darwaza”.

MBBS Dr Uday Gupta himself is clueless about medical ethics that require female assistants to be around when a male doctor examines a patient.

Trying to say too many things at the same time, Anubhuti makes a merry mess. Uday’s mother (Sheeba Chaddha) makes strange food and then, a la half-a-dozen films including the recent Darlings, she makes food videos. Moms who’ve been single for decades aren’t supposed to date, moms who go on Tinder are chuckle-worthy, and Dr Fatima lectures Uday on how to understand girls who kiss one guy but are engaged to another. Uday gets rebuked by the knot of women around him, constant reprimands that are supposed to upgrade him on feminism.

Ayushmann looks as confused as the script while Shefali Shah and Rakul Preet perform by finger-wagging.

A delivery in the corridor, role model orthopedic, the much-married family man Dr Ashok (Indraneil Sengupta) impregnating a minor, a callous near-death abortion and many raps on the knuckles for sidestepping medical ethics roll by before Dr Nandini’s “wisdom” dawns on Dr Uday Gupta. “You have to lose the male touch to become a gynaecologist,” she dispenses.