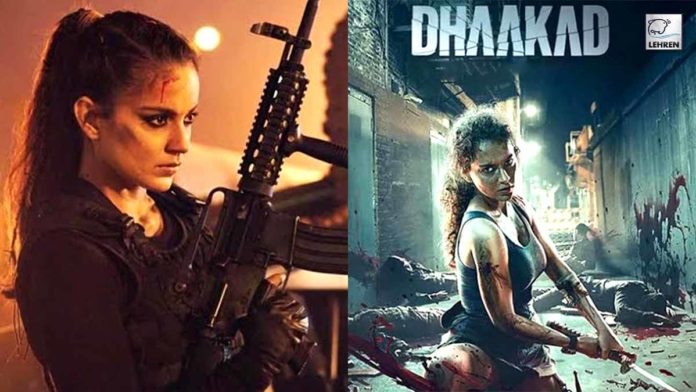 There is something called mood lighting. And there’s morose lighting which valiantly tries to be classy but ends up monotonously monochrome.

Like everything else about director Razneesh ‘Razy’ Ghai’s tiresome Indian hotchpotch of Atomic Blonde meets Kill Bill, the cinematography by Tetsuo Nagata also slumps while trying hard to uplift a dead narrative.

One would think that a careful dresser like Kangana Ranaut would’ve at least ensured that she had a wardrobe uniquely different from the look that Uma Thurman and Charlize Theron sported in their action avatars. But groan, here too agent Agni (Kangana Ranaut) comes off as a feeble copy of the swashbuckling women of the west.

Whether the writing by Ghai, Rajiv G Menon and Ritesh Shah with endless and repetitive flashbacks or the tone and feel, Dhaakad is singularly unimaginative in its presentation and execution. Irritating too with dialects, strange voices and pronunciation like ‘kosis’, ‘paresaan’ and ‘tiraai’ (for ‘try) strewn all over several characters and the ancient use of a childhood trauma to light Agni’s fire.

Agni moves from Budapest to Bhopal in her mission to bust an international human trafficking racket, passing herself off as a tailor, a prostitute, a photographer and a party girl to get to Rohini (Divya Dutta) and Rudraveer (Arjun Rajpal), the ruthless kingpins who revel in criminality. Therefore, the writers and the action guys keep bludgeoning brains, blowing holes in the forehead and setting a man’s head on fire to showcase the starkness of their horror. But the horror is that the attempt to recreate a Joker-Harley Quinn kind of partnership comes off like a faded copy with not a single scene that spells creativity. Smoke rings, cheers to liquor and easy sex add to the general sleaziness, although one must add that there’s nothing visually explicit.

At the end of a very tiring journey, the unveiling of the real kingpin is far too obvious to spring a surprise. A classic case of poor writing.

Divya Dutta does what she has to with trademark professionalism which is lost in a product that scores low in every department.

Most disappointingly, Kangana Ranaut whose control over her craft has always been so admirable, delivers her kicks, punches and her lines without her usual spunk.  In fact, in some shots like the ‘Don’t send me to India’ scene or the ‘so hawwwt’ line, she strikes an uncharacteristically false note, her effortless naturalness missing completely.

‘So ja re nanhi’, a lullaby that’s supposed to send shivers down the spine, is overused. But yes, it sums up what Razy Ghai’s film ends up doing. Good night, sleep tight. And never mind the noise that makes no sense.