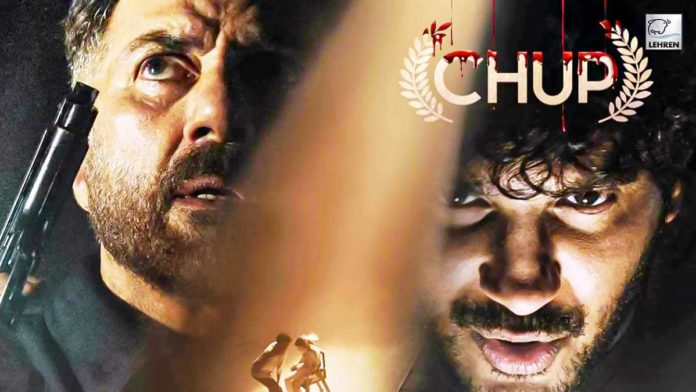 It’s like the secret fantasy of every filmmaker come true – kill a film critic every Friday.

It stumps Crime Branch officer Arvind Mathur (Sunny Deol) who can see that the killer carves the same number of stars on the forehead as the rating the victim gave a recent review.

But there’s little else to lead Mathur to the serial killer and passion for his job doesn’t want the CBI to take over.

Alongside the serial killings, writer-director K Balki sprinkles his trademark humour while planting a flower fresh chemistry between entertainment journalist Nili Menon (Shreya Dhanwanthary) and lonesome florist from Danny’s Flowers (Dulquer Salmaan) who softly lifts a snail onto a leaf and grows tulips in his garden in Bandra. His chats are with his flowers and with a friend in his head, leading to a few chuckles when Nili does it too. Balki’s other speciality is a touch of the unique in a relationship and there’s one in Nili’s house between her and her mother (Saranya Ponvanna) that’s as warm as the idlis coming off the mould.

Balki drops heavy hints and brings the killer to the fore before halftime but with Zenobia (Pooja Bhatt) joining in to pitch her study of criminal minds and create a profile, the chase, the ‘catch me if you can’ brazenness of the killer stays engrossing most of the time. There are lull-pockets in the pace that take away the thrill in a few places until the love story and the sleuthing ultimately mingle.

It’s a strange mix that combines well. Gruesome, barbaric killings but also the bigger picture where cinema is a celebration. The strains of Geeta Dutt’s ‘Jaane kya tune kahi’, ‘Waqt ne kiya’, lingering melodies from Pyaasa and Kaagaz Ke Phool, a thoughtfully handmade bouquet of kaagaz ke phool (paper flowers) from the eco-friendly boyfriend to Nili on Guru Dutt’s birth anniversary, and lines like, ‘Upar phool, neechche Mehboob’ with flashes of the iconic Mehboob Studios, mark an outpouring of love for cinema.

Whether critic, entertainment journalist or filmmaker, cinema is the common love.

Although the premise provided grounds for sound critics-bashing, Balki actually gets the space of a critic pretty well, even giving him a dash of respect. There’s Amitabh Bachchan, Balki’s favourite cameo artiste, putting the job in the right perspective too. Perhaps that’s where former critic Raja Sen’s presence in the writing team made a hefty contribution. It’s a trio of Balki, Raja and Rishi Virmani at work here with the director’s sophistication and wit prevailing even over serial killings.

For instance, there’s a ripple of laughter in the audience over a critic’s 1.5* rating. Or the way Arvind tucks in his stomach when Zenobia talks of a victim’s ugly paunch. It’s just the way Balki handles it. Or the scene where the mother laughs and laughs at Nili’s review. Or where a murder’s around the corner but Balki keeps his background subtle enough not to intrude. Unlike Hindi movie thrillers where the score hits you on the head as a heads up.

The dialogues too have freshness wafting in. They may be the cheesy rhyming variety like ‘Prakruti ki tokri mein chokri’ and ‘Rose rose roz roz’…and Zenobia’s lines may be heavily ponderous like, “He’s a mission-oriented killer, blah blah” but they do land well most times.

It’s a satisfying performance from charmer Dulquer Salmaan and his generous mop of hair while Shreya Dhanwanthary who played a journalist in Hansal Mehta’s Scam too, is comfortable.

Chup is, of course, not perfect. You do wonder how a journalist with a perceptive mother who doesn’t even know her boyfriend’s name or anything about his family is driven solely by chemistry to have a full-fledged relationship with him. Lonesome Christian florists are surrounded by families that know the history of everyone in the neighbourhood.

Also, you don’t require deep research and a dive into the archives to get info on filmmakers who were around just 10-12 years ago. There are plenty of critics (in the Hindi film industry and elsewhere) who’ve been around for decades and would have most info on their fingertips.

There are other small things like, Nili Menon’s mom bursting into Tamil, not Malayalam, before the TV.

And the winding up which gives the killer an entire reel of sentimentality, rounded off with Zenobia’s platitude about a damaged mind (“Pain is a fuel…and you give 1* to his pain”), offers no comfort or justification for the venomous brutality of the killings.

But the presence of both Pooja Bhatt (welcome, Pooja) and the reassuring solidity of Sunny Deol give Chup its gravitas. Of course, when Sunny breaks into his vintage ‘Bastard” before jumping from the window in pursuit of the criminal, you can’t help but whistle, “Yeah, he’s back.” Once in a while, subtlety be damned.

Watch the trailer of Chup: Revenge Of The Artist