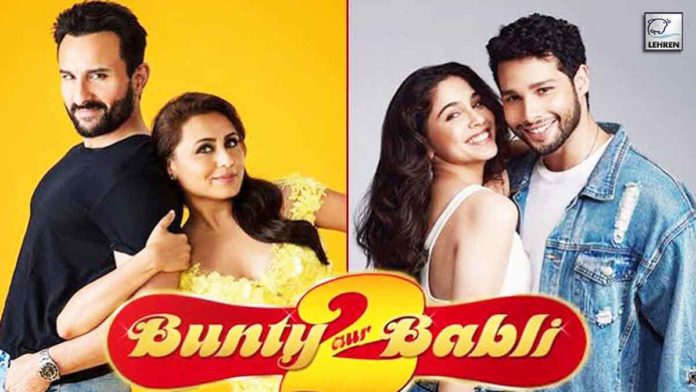 Was Aditya Chopra toying with the idea of going Rohit Shetty’s way and expanding the universe of Bunty Aur Babli to bring in more players? It’s a neat thought.

The story, credited to producer Aditya Chopra, is also a creative way of bringing new energy to the 16-year-old franchise. You can’t fault the basic line of a copycat duo of youngsters who con the gullible by using the brand name Bunty Aur Babli – famous for never having been caught. Of a cop (Pankaj Tripathi as Jatayu Singh, replacing Amitabh Bachchan who was Dashrath) prising the originals out of retirement to go catch the replicas. It’s like Leonardo di Caprio’s Catch Me If You Can – set a thief to catch a thief.

The foundation is strong. It’s the rest of the blueprint that’s faulty. Pin it on writer-director Varun V Sharma who just doesn’t get the tone of the original in the way he expands on the thought (screenplay) and goes about executing it (direction).

For one, there’s little freshness in the con game. It begins with a bunch of paunchy ‘ho-hum, so tiresome’ lecherous businessmen. One promo of something called Virgin Islands which doesn’t exist on the map and each businessman easily parts with Rs 5 lakh in cash to Kunal Singh (Siddhant Chaturvedi) and Sonia Rawat (Sharvari Wagh) who dangle a dirty holiday before them.

Varun, it’s not 2005, you know. It’s the internet era and businessmen, however antsy in their pants, don’t move without double checking where every rupee is going.

While ex-engineering students, Kunal and Sonia up the ante passing off as Bunty Aur Babli, the real ones, Rakesh Trivedi (Saif Ali Khan replacing Abhishek Bachchan who was in the original) and Vimmi (Rani Mukerji) have settled down to domesticity with a tummy, lard and a fat kid. Why they couldn’t have smartened themselves up in fifteen years is a worry since a fat middle-aged couple is yesteryear comedy.

It gets more gross. Rakesh and Vimmi party with kids dancing seductively to ‘Kajra re’ like those unwatchable reality shows that feature children doing adult moves. Vimmi throws, ‘I’m a Sikhni” whenever she’s in the mood and Rakesh forgets which accent he’s supposed to sport.

Later, Varun Sharma takes time off from all the conning to have Vimmi play an ancient-era jealous wife who goes raging down the sands in a beach buggy when young Sonia pals up with paunchy Rakesh. Freshness, Varun, freshness. Wife-fuming scenes aren’t rib-tickling anymore.

Kunal and Sonia have monologues on the educational system and unemployment that say nothing new about the social order but do aid in pulling down the mood even further.

So where has the second edition gone wrong? One, Sharvari and Siddhant perform efficiently but have yet to acquire the easy sparkle of naughtiness to carry off Bunty Aur Babli. Two, Rani and Saif are not presented endearingly. The expanded universe with two pairs of Bunty Aur Babli on the loose will therefore need some brilliant writing.

Three, a lot more thought needed to go into getting 2.0 updated with jugads that are both smart and brimming with fun. Dated thoughts should’ve been dropped.

Most of all, I missed a blockbuster number like ‘Kajra re’. I truly closed my eyes when a little kid danced to it.

Aditya’s good with con games on screen, he’s done it before with his Dhoom series, and topped each with at least one chartbuster.

Bring back that Aditya, please.