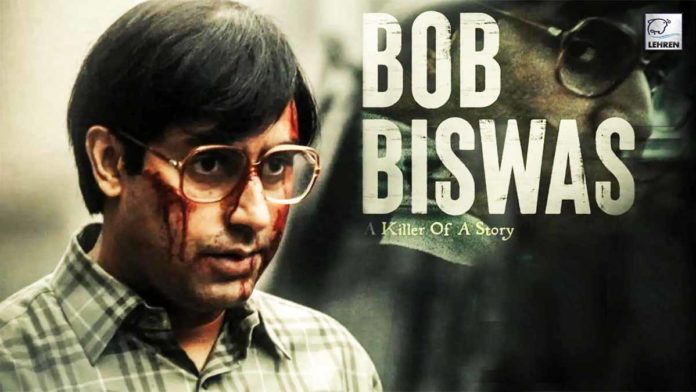 Bob Biswas is a spin-off to the 2012 thriller film Kahaani. It is produced by Red Chillies Entertainment and features Abhishek Bachchan and Chitrangada Sen.

Killer Bob Biswas with the apologetic poker face was one of the many refreshing elements that contributed to the success of Sujoy Ghosh’s Kahaani in 2012.

So, it was a great idea to take that unforgettable character and build a thriller around him.

Bob Biswas (Abhishek A Bachchan) is amnesic after an eight-year coma and it’s now tough for him to recall either wife Mary (Chitrangada Singh) or his life before he met with an accident.

Two men are on his tail as soon as he’s discharged from hospital.

Bob’s clueless about who he was or who he is. But given a gun, he can load it with professional ease and shoot without a squirm.

There begins and ends the mystery that Sujoy Ghosh writes for daughter Diya Annapurna Ghosh to direct as her debut feature film.

Spotlighted is a drug called Blue, the medication for attention deficiency banned years ago, that’s in fast circulation. College kids are ready to beat up anybody to get their hands on it.

Bob Biswas is willing to kill without question or without a twinge.

Dhonu (Pavbitra Rabha) is a roadside food seller who’s a part of the killer gang.

Mary goes to work for a sleazy boss. She slippers him one day – a track that’s got little to do with what’s supposed to be a thriller.

Bob has a few flashes of life before coma.

A policewoman (Tina Desai) and her lady boss are in cahoots, their short, furtive exchanges more on the lines of criminals than of crime-busters.

The background score sounds like enhanced heartbeats which stop abruptly when a new scene begins.

There’s an indiscriminate killing every second scene. Drug-seller Bubai (Purab Kohli) kills a college kid after indulging him. Dhonu kills a doctor. Bob guns down many, bullets sprayed around nonchalantly, with the casualness of a balloon seller setting his wares free.

Since it’s a thriller, we won’t divulge how many more bodies pile up. Or who else joins David in the grave.

Except that Bob knows where to dig up a diary that incriminates everybody.

So once the ‘Ustaad’ (Kaushik Raj Chakraborty) who’s calling the shots (oops, this is a pun), and the guys tailing Bob are all accounted for, is it the end or the beginning of the kahaani?

In keeping with the flat tone of the film, playing Bob Biswas is more a physical transformation with prosthetics than a call for histrionics for Abhishek Bachchan who’s made to largely stick to one baffled expression.

It’s the same with Sujoy Ghosh’s writing that’s somewhat monotoned with more kill than thrill. It ends up as a kahaani mein little twist. You’re as clueless as amnesic Biswas about what his accident was all about. Or indeed, why he’s telling us this back story.

Therefore, it’s only the ground thought of making a story around Bob Biswas and the last shot which links it all to Kahaani, that are worth a watch. It’s the comatose in-between that’s the problem.