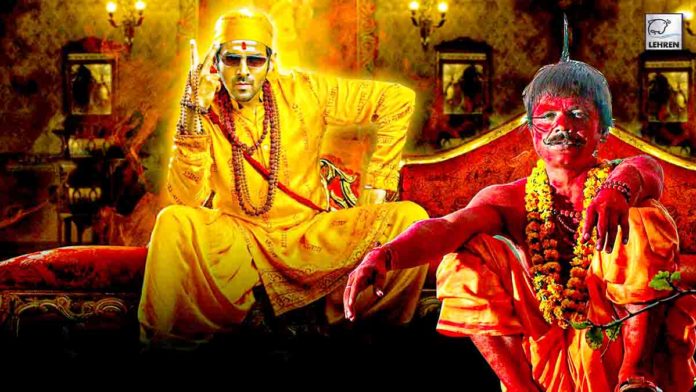 Bhool Bhulaiyaa 2 is a horror-comedy film starring Kartik Aaryan, Kiara Advani, Tabu and Rajpal Yadav. It is directed by Anees Bazmee and produced by T-Series.

15 to 17 years after laugh riots like Welcome and No Entry, director Anees Bazmee continues to have an unmissable flair for comedy entertainers.

The franchise value of Bhool Bhulaiyaa (the Priyadarshan directed hit of 2007), an audience that’s been waiting for a well-written horror comedy and stellar performances combine to deliver this year’s first genuine box-office attraction.

The mood for mystery is set in a mansion in Rajasthan with a tantrik (Govind Namdeo), Tabu being dragged around by an invisible force and incarcerated in a room up with a trishul outside the door, and Tabu fleeing with the rest of the family. Aakash Kaushik’s story and screenplay throw intrigue to the viewer straightaway as one Tabu is locked up and the mansion is abandoned.

The writing, the invigorating dialogues (Farhad Samji+Kaushik) and Bazmee’s direction immediately swing to humour and romance, again without delay, as Ruhan Randhawa (Kartik Aaryan) and Reet Rathore (Kiara Advani) meet with refreshing youthfulness, travel with reason back to the sinister mansion and draw in the whole family.

The emphasis is on the writing because the parallel tracks of occult horror and a sense of fun move and mesh efficiently with vigour in the scenes and flesh given to every character. Ruhan’s ‘Bura mano toh’, deftly turning ‘suar’ into ‘sure’ and ‘call’ into ‘kol’ (‘kal’ pronounced like a Bengali) and several other rib-tickling lines keep it rollicking.

Twins Anjalika (Tabu) and Manjulika (Tabu) look alike but are as different as a beautiful dawn and an eerie dusk.

Reet has to pretend to be dead with Ruhan (established soon enough as a rich kid who’s pretty footloose) helping her keep up the charade as the Rathores gather back in the mansion where Manjulika has been locked up for the last 18 years.

Comedy, creeps, the paranormal and romance take turns to keep the show going. Despite an assortment of family members including a stern father (Milind Gunaji) and a chacha (Rajesh Sharma), there’s no confusion in the chaos. The show is also pulled off because of performances by the champion trio of Tabu, Kartik Aaryan and Kiara Advani with perfect comic timing from Sanjay Mishra, Rajpal Yadav, Ashwini Kalsekar and child artiste Samarth Chauhan who’s actually cute as Potlu.

Like she did in Andhadhun four years ago, well maintained Tabu proves once again that she’s a rare blend of versatility in performance with an arresting face.

This is like a showcase for Kartik Aaryan who gets to do it all. Have fun, charm a girl, swagger, shiver, solve a mystery and dance like a hero. Apart from flamboyantly shaking a leg to the title track at the end credits, Kartik’s impressive standout is his turn reprising Vidya Balan’s ‘Amee jee tomar’ dance from the original Bhool Bhulaiyaa which is still etched in public memory. Not easy for an actor to pull off a woman’s dance moves without coming off as a transgender.

Kiara Advani continues to be pretty and grows as an efficient performer.

It’s not the kind of film where you stop to look for logic like how Reet’s death is naively accepted by her family when there’s no dead body.

The length is also a bit of a put off. While the mystery is kept up till the end, the end is a tad abrupt, there are moments when the pace drops and there’s an unnecessary song like ‘Hum nashe mein’ which is neither melodious nor helps to take forward any part of the narrative.

But it’s fair play when due credit is given to Tabu’s body double and to her dance double.