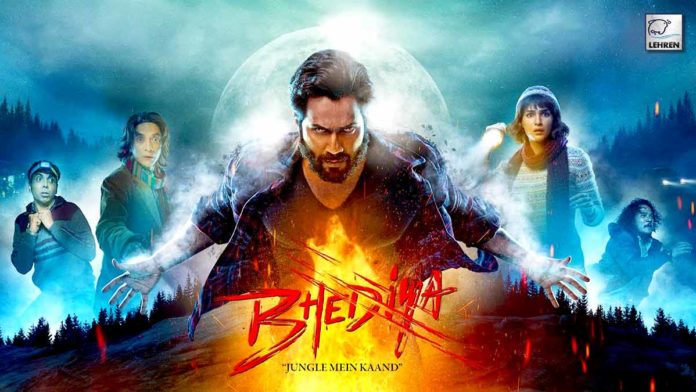 Bhediya is a horror comedy film starring Varun Dhawan and Kriti Sanon. Directed by Amar Kaushik, the film is produced by Dinesh Vijan - it is the third installment in Vijan's horror-comedy universe.

It’s a ticket to money and an upward climb in his career when Bhaskar (Varun Dhawan) pockets a coveted contract to build a road in the jungles of Arunachal Pradesh and takes along cousin Janardan/JD (Abhishek Banerjee). His intentions are urban, covetous and callous, entirely disconnected from flora and fauna and unconcerned about messing with ecology. Until a bite from the jungles gives Bhaskar a taste of what tree cutting and displacement under the garb of development can do to the environment.

Let’s first applaud director Amar Kaushik and writer Niren Bhatt for never forgetting the requisites of a horror-comedy and keeping the mirth intact while mixing emphatic social messages into the fun. Alongside tricking tribals into putting thumb impressions on their property papers and feistily dancing to ‘Jungle mein kaand’ are creepy warnings from locals that go, ‘Jo jungle ko kaatega, vishanu usko kaatega’.

Entertainment and empathy are constant companions.

The transformation of Bhaskar into Bhediya may leave a trail of blood but it’s also the dawn of a conversion.

By going into the jungles of Arunachal Pradesh, the team scores several goals. The natural, virginal beauty of this rarely explored Indian state makes a refreshing backdrop. Hammering home the fact that Arunachal Pradesh and the North-East are a part of mainstream India is worthy of a hearty thump on the back.

With the introduction of Jomin/Jo (Paalin Kabak) and JD’s light banter with him, sensitisation is slipped in. The hurt felt when an Indian from elsewhere likens citizens from the North-East to the Chinese or cracks constant jokes about kung fu and Bruce Lee. At one point, Jo throws his hands up and announces, “I don’t know kung fu.” Much applause also for the line, “Those who know ‘kam Hindi’ are not ‘kam Indian.”

The dialogues are in keeping with the blend of humour and heft. Lines observe, ‘Poets, lovers and bhediya have a fascination for the moon’ and humans are told, ‘Tum jaanwar banne ke liye laayak nahi ho’. Even when the going’s tense, wit is always around the corner. Like when Bhaskar discovers that he turns into a bhediya and is distraught over his killings, JD pacifies him with the thought, ‘Insaan ke liye murder, bhediya ke liye dinner.’  Or, ‘Are you observing Karwa Chauth that you’re waiting for the moon?’

But entirely avoidable was the disgusting toilet humour. Makes you want to throw up.

Among a few points that go against Bhediya is its length. It gets tedious in places.

A unique subject that is attractive to those who want to view something different also carries the inherent risk of not being palatable or comprehensible to all.

Elements like an ancient local doctor, a lingo that requires translation and the uniqueness of the bhediya might be a bit of a self-goal since Arunachal Pradesh stands out as exotically different from the rest of India.

On the other hand, sequences like when Bhaskar is unable to become a bhediya will draw a laugh though it’s actually a moment of tension.

Varun Dhawan comes up with perhaps his best performance thus far, youthfully energetic (the lively dances), emotionally precise (moving from uncaring of ecological destruction to being invested in its preservation) and physically gruelling (the transformation of Bhaskar to Bhediya).

It’s a line-up of twitch-perfect performances. Abhishek Banerjee gets to crack some of the best lines, Deepak Dobriyal as Panda is in his element when he narrates how he witnessed a two-legged creature mutate into a four-legged attacker, Paalin Kabak makes Jo endearing. And Kriti Sanon who has a shorter but impactful role as vet Dr Anika acquits herself with competence.

A good word for the special effects and for producer Dinesh Vijan for backing a worthy but risky film. Like a Marvel film, do wait for the end credits for there is some more fun in Kaushik’s store for the viewer to take home.

‘Baaki sab theek’. A light, breezy song that guys sing, setting the mood for a carefree ride.  It’s a ticket to money and an upward climb in his career when Bhaskar (Varun Dhawan) pockets a coveted contract to build a road in the jungles of...Review | Bhediya - The Howl Of Horror, Humour & Messaging