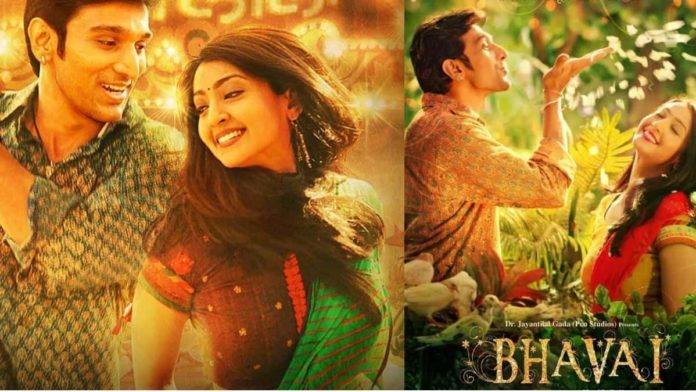 It’s well made right from its titles. The golden deer prances around, there’s Garud, Hanuman, the jungle. And the Ramayan unfolds in black & white animation with flecks of gold and a melodious classical musical score.

A drama company has arrived in a village in Gujarat to stage the Ram Leela just before Dassera. Writer-director Hardik Gajjar explores the blind faith of villagers who worship the actors, believing them to be really the noble Lord Ram, the pious Sita and villain Ravan who must be destroyed.

Exploiting the faith are a politician from a saffron party with lusty cries of ‘Jai Shri Ram’ as he leads a rath (chariot) with the lead cast and the village folk feel blessed to have seen Ram and Sita in flesh and blood.

Imagine how potent mob fury can be when it’s discovered that Ravan (Rajaram played by Pratik Gandhi) and Sita (Rani played by Aindrita Ray) have fallen in love and are eloping. It’s Vijay Dashmi, the day Ram slayed Ravan. How can Ravan be allowed to kidnap Ram’s wife in real life?

It’s touching because it’s so true.

Evoking God and inciting crowds to violence are a reality. And they do have catastrophic outcomes.

Hardik Gajjar uses folk theatre, music (Prashant Sashte and Shabbir Ahmed) and a fabulous tour of backstage shenanigans to build the fury against Ravan to a crescendo of hate and violence.

He gets immensely credible performances from Pratik Gandhi as Rajaram, the local Panditji’s son whose dream is to be an actor. A dream fulfilled when he goes angling for a role. Ravan (Abhimanyu Singh) who’s also the producer of the show, falls ill and Rajaram gets a lucky break.

Gajjar adds several moments of humour especially backstage with Ram (Ankur Vikal), Hanuman (Rajesh Sharma) and a bunch of actors who’re as human as anybody else. Like an electrician and side actor eternally aspiring to play Ram and get upgraded.

It’s an emotionally strong story too as the romance between Ravan and Sita builds. However, there’s one song too many. ‘Kahe muskayi re’, for instance, has a nice lilt but is totally unnecessary.

What Gajjar ultimately conveys about the dangers of mixing religion with politics is poignant.

Thought-provoking with daubs of humour and a good measure of emotions plus beautiful music, competent performances and a fresh look at actors off-stage, make it a powerful watch.

But the obvious and sharp slant that singles out saffron politics can be a turn-off.