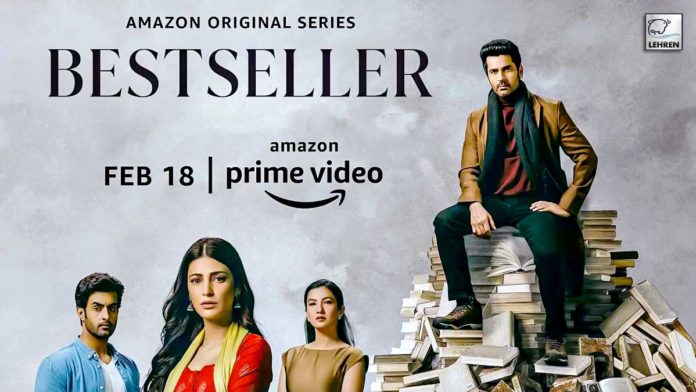 Based on Ravi Subramanian’s ‘The Bestseller She Wrote’, director Mukul Abhyankar uses the backdrop of books, publishers and commercial ad making to attempt a thriller about the people who man this world.

From coffee shop fan moment to a fling in the writer’s bedroom is just a few steps away.

Running parallel is Mayanka who is introduced as a ball-crushing boss but is easily bowled over by baby-faced Parth.

Does Tahir deserve success? Will he pass off Meetu’s story as his own? Writers Althea Kushal and Anvita Dutt use flashbacks for Meetu’s past to be served to Tahir on a platter with him disclosing one of his own back stories too. Why he’d selectively open that chapter to Meetu may be shrugged off as the sloppy establishment of a base for what will soon follow.

After a few trips to exotic India (Varanasi/Rajasi), ad filmmaking with awards functions, simmering rivalries in a marriage and extra-marital indiscretions, the link between two seemingly unrelated characters surfaces. And it’s time for masks to be peeled off, knuckles to be bared.

An oft-used element for relief from the tension of intrigue is a sharp detective who hides his skills under general goofiness and an obsession for food. Mithun Chakraborty fits the bill as Lokesh Parmanik, on the verge of retirement. And he has a back story too.

Shruti Hassan is cast well as vulnerable, small town admirer Meetu from Rajasi who’s dazzled by Tahir, his house and a five-star hotel room. Arjan Bajwa as the writer with many weaknesses, Gauahar Khan and Satyajeet Dubey are comfortable in most parts but not with consistence.

The main problem is that with Parth shown right away as Tahir’s stalker, you don’t have to go too far to guess who’s his teammate. Most of the turns are as obvious as Shruti’s light eyes, so they don’t take you by surprise. Whether it’s the main character’s true identity and agenda, or the climax which is laughable in today’s times of forensics expertise, none of it makes you sit up.

Also, the punishment seems too severe for what’s essentially a crime of unethical insensitivity.

I guess a fast-selling page-turner does not always guarantee a fast-moving cinematic edition.