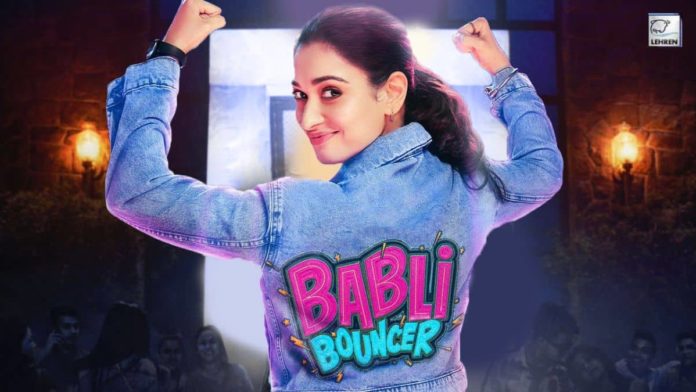 Babli Bouncer is directed by Madhur Bhandarkar and features Tamannaah Bhatia. It is produced by Star Studios and Junglee Pictures. The film is now streaming on Disney+Hotstar.

Her father (Saurabh Shukla) proudly watches her lift more weights than the boys in his akhada (body building arena), her mother (Supriya Shukla) moans that she can’t make round rotis and her schoolteacher (Yamini Dass) dismisses Babli Tanwar (Tamannaah Bhatia) as the non-achiever who’s eternally eating.

Going into a Haryanvi village on the outskirts of Delhi which trains and produces high quality bouncers for the pubs and clubs of the capital, is a novel premise and so is the pivot of a pehelwan’s daughter turning into a bouncer. But the largely unambitious and crass Babli who puts you off with her loud burps and pile of parathas, makes her way into a bouncer’s uniform solely in pursuit of Viraj Kaushik (Abhishek Bajaj), the schoolteacher’s London-returned son who works in the corporate world of Delhi. Too naïve to be aware of how she is an uncouth misfit, Babli’s also unschooled enough to mistake Viraj’s normal, decent behaviour as reciprocation of her feelings for him.

It takes a night of virgin drunkenness (as in, her first taste of alcohol) for Babli to be shown the mirror by Viraj.

It’s a rude awakening that turns carefree Babli into a woman who needs to spruce up her act and stand on her own feet. But a streak of self-respect has always been latent in her, evident even when she turns down Viraj’s chivalrous offer to drop her home.

Understanding how deeply rejection can hurt, there’s also the moment when Babli realises that she herself has used unabashed admirer Kukku (Sahil Vaid) as a steppingstone to reach Delhi and comes clean with him on Friendship Day. He’s a friend and will remain one.

Director Madhur Bhandarkar succeeds in first presenting Babli quite crudely. Like digging her nose and touching a samosa to put off a suitor arranged by her parents. You see her the way Viraj saw her – disgusting in many ways.

While the arc is predictable, Madhur doesn’t go to the other extreme by turning Babli into a cultured sophisticate overnight. It’s a story that’s happened in the last six months and well, she’s still struggling with her English.

There are nice rural touches. Like Babli flipping a stone, wet side or dry, instead of a coin to decide how to deal with a couple of eve-teasers. Or exclaiming, “Bhains ki puppy” when she’s astonished, the drivel about her “bhains” to keep “Uncleji”, the rich customer (Sabyasachi Chakraborty) conscious till they reach the hospital after an unexpected heart attack, and the signature dance movement that’s like a pehelwan’s exercise.

When Babli finally uses her skills as a woman with a mean punch to save another woman and wins honours for bravery from the Chief Minister, the transformation is also in how the rest of the world now perceives her. Success does change other people.  The policeman who’d been high-handed when she was arrested on the night of drunkenness goes on television to say that he always knew her as a woman with a solid punch. The schoolteacher and the son now openly admire and welcome her. And the sarpanch who’d earlier said she’d bring shame to the village calls her the pride of their gaon.

Madhur is helped in the writing department by Amit Joshi and Aradhana Sah with additional dialogues by Sumit Ghildiyal but more sparkle in the screenplay and more wit in the dialogues would’ve given Babli’s story a better punch. Kukku’s regular line, ‘Woh toh hai’ isn’t really humour. Dil Toh Bachha Hai Ji, the director’s earlier attempt at comedy, was better with the chuckles. One would’ve also liked a chartbuster in the musical score.

There will be those who’d have wanted Madhur to delve a little more into the life and career of a bouncer. Because that’s what we’ve come to expect from Madhur Bhandarkar, the full-on study of a profession.

On the other hand, Madhur has been often criticised for repeating his Fashion template in later movies like Heroine and Calendar Girls, replete with sexual compromises and a gay touch or two. Despite the setting of a club/bar, give it to him for not making it the gritty and grotty tale of a woman a la Chandni Bar, Fashion and Heroine. He uses Viraj’s birthday scene too only to show alcohol making Babli shed her inhibitions and reveal her feelings for him without turning sexually crass at any point of time. Also, there isn’t the usual high society being mean to Babli or the city slick taking advantage of her. And fortunately, she throws a “Phuck you” at the right moment.

If you think about it without prejudice, the gender balance Madhur presents is not only about Babli being equal to any man in going from crude and unambitious to becoming an example for other girls to follow. He makes statements that customers like Dolly Chaddha (Upasana Singh) can also be just as obnoxious as the men.

Tamannaah comfortably carries off the Haryanvi accent and Babli’s transformation with warm support from Saurabh Shukla, Sahil Vaid and Abhishek Bajaj. For a story that’s told simplistically, an OTT release is the safest route today.