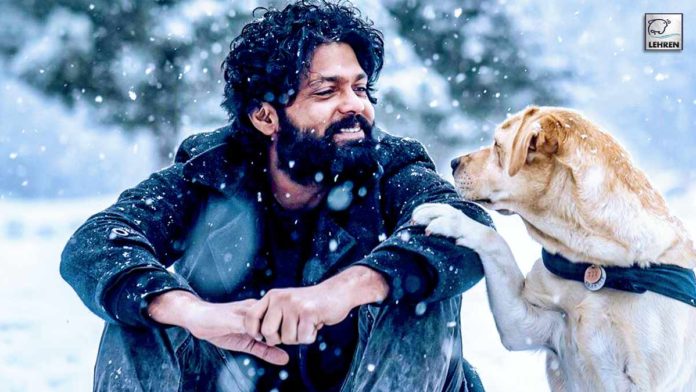 777 Charlie is a Kannada film starring Rakshit Shetty, Sangeetha Sringeri, Raj B Shetty, Bobby Simha and Danish Sait amongst others. The film is written and directed by Kiranraj K, produced by GS Gupta and Rakshit Shetty.

There’s an ad that shows a depressed man on the beach irked by a dog that tries to get his attention. But within a few minutes, its dogged determination to play fetch with him, makes the man break into a smile and start enjoying the new companionship.

Writer-director Kiranraj’s Charlie 777 is like a heartfelt expansion of the same thought as Dharma (Rakshit Shetty), an agonised anti-social whose beat is home to work and back, with idli and beer for company and nary a smile for anybody, forms an unlikely bond with a dog.

A backdrop of Chaplin films like A Dog’s Life point to why the female dog who has walked into and upturned Dharma’s life gets the name Charlie.

It’s all about a feeling that a pet stirs in a human and more than reading about it, watching it is important to experience that special chemistry.

With the entry of Charlie, everything and everyone about Dharma changes. Even his house starts looking brighter. And right from the little girl who was petrified of him but now shares cherished moments with Charlie, everybody around Dharma begins to feel the difference. Sunshine and smiles are in generous supply.

Until a heartbreaking moment when the vet pronounces a dire end that’s just around the corner for Charlie.

Check Out: Divya Spandana Aka Ramya Gets Emotional After Watching 777 Charlie

Dharma’s resolve to give Charlie the best in her last few days tugs at the heart and a few hankies would help while you watch the bond that wins you over completely. Kiranraj writes in a sunny ending too, heartrending in some ways but ultimately positive. And Rakshit Shetty makes Dharma’s relationship with melting Charlie seem almost real.

What’s there not to recommend in such a sweet film? I would say that Kiranraj could have kept it crisp though he does make some fine points about human nature, callous breeders and dark clouds being temporary.

So okay, it’s the length, way too long at 2 hrs 40 min, and a couple of unnecessarily stretched sequences, like the many obstacles before Dharma can take Charlie to frolic in the snow, that one could crib about.

But it’s that warm and cuddly feeling that wins. I’m an unabashed animal lover. But even if you aren’t, do go and befriend Charlie. She’s worth your ticket money.