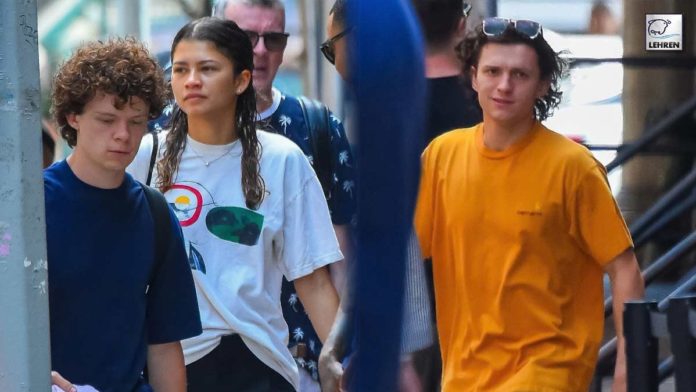 Tom's younger brother Harry joined the co-stars of "Spider-Man: No Way Home" as they ordered meals to go from a restaurant in New York City.

On Wednesday, July 20, Zendaya and Tom Holland made a rare public appearance together in New York City. With Tom’s brother, Harry Holland, 23, the young couple ordered takeaway from a restaurant in New York. Zendaya, 25, was holding two to-go bags of food and a cold drink. The couple and Harry appeared to enjoy their supper at a neighbouring hotel or apartment.

Zendaya and Tom dressed casually for their to-go meal. The Euphoria actress donned a white T-shirt with vivid patterns, black sweatpants, and black and white Converse sneakers. She wore no makeup and kept her brown hair down. Tom, on the other hand, was dressed in a bright orange T-shirt and grey sweatpants. The co-stars of Spider-Man: No Way Home usually keep their romance quiet, while Zendaya openly gushed about Tom on his 26th birthday on June 1.

She posted a sweet black-and-white photo of the duo, along with a touching homage to her partner. Zendaya wrote, “Happiest of birthdays to the one who makes me the happiest.” For years, Tom and Zendaya were the targets of relationship rumours while they collaborated on Marvel films. When they were photographed kissing in a vehicle in July 2021, the couple’s romance became public. They’ve raved about their love and supported one other in their jobs since then.

In an April interview with Entertainment Tonight, Zendaya stated that Tom paid her a visit on the set of Euphoria “at least 30 times this season.” “He supported me through the whole season,” Zendaya said. “I think it’s great to have that support and love around you because you need that,” she said at a Euphoria For Your Consideration event in April 2020. “This isn’t an easy job, so it’s good to have that to free you up from it every now and then.”

The appearance comes only days after Zendaya was injured while attempting to cook. On Wednesday, the Emmy Award-winning actress took followers on a kitchen crusade that ended in the hospital, which she shared on her Instagram stories. Zendaya also revealed that she had to get stitches and declared that she was ‘never cooking again.’