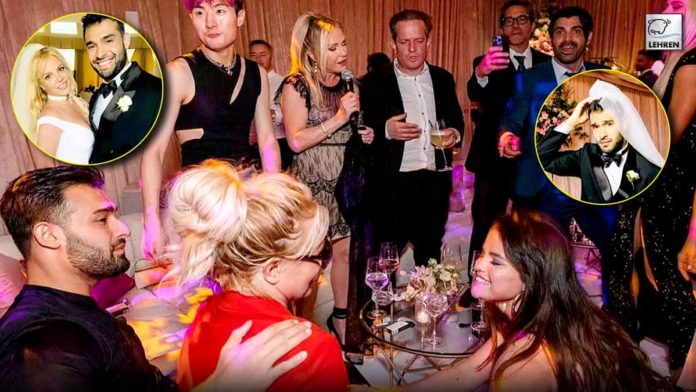 The pop sensation shared a video montage that features sneak peeks from Sam Asghari and Britney Spears's wedding and reception.

Britney Spears and her partner Sam Asghari exchanged vows in an intimate wedding ceremony on Thursday, with them celebrating the wedding with a star-studded party. The singer and her husband tied the knot in front of a small group of guests. Meanwhile, Spears’ relatives like her sister Jamie-Lynn Spears, her mother and her father are said to have not been in attendance. The newlyweds are tied the knot in a ceremony on the grounds of her mansion in Los Angeles, with a wedding tent having been decorated for the occasion.

The decoration featured plenty of pink and floral decor, with the bride and groom exchanging vows underneath an extravagant floral arch that had been placed at the end of the aisle. The ceremony was followed by a wedding reception which saw a number of A-list celebrities take to the dance floor alongside the bride, who has been married twice before. Sam Asghari and Britney Spears’ reception was held in the same tent as the nuptials themselves, with it, transformed into a more social space, including sofas, for the evening.

The bride was seen on the dancefloor with Madonna and other celebs and friends including Selena Gomez and Paris Hilton. Drew Barrymore was photographed at the wedding reception with Britney as well. Other guests in attendance for the reception included actor Ansel Elgort as well as reality TV stars Paris Hilton and her mother, RHOBH’s Kathy Hilton, who were also there. However, since her wedding, Britney has shared photos with her Instagram followers. And recently, the pop sensation posted a few more photos from her reception.

One photo shows Britney, wearing what appears to be another red outfit, and Sam sitting on a sofa in the middle of the reception, with Selena speaking to the newlyweds. Other photos show the bride alongside attendees, with one showing her dancing barefoot alongside a guest. Songs played at the party are said to have included Britney’s Toxic. The singer also shared a video montage that features sneak peeks from Sam Asghari and Britney Spears wedding and reception.