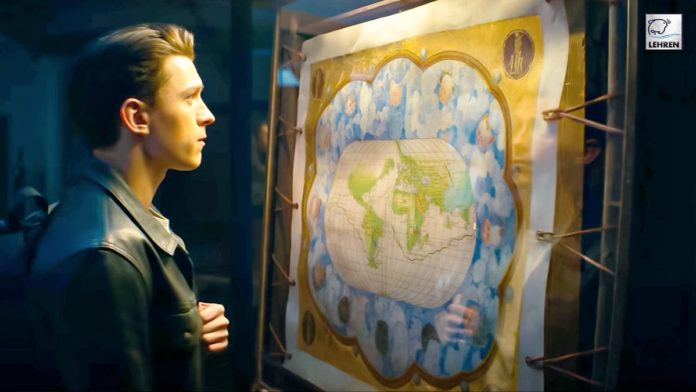 Uncharted, which is based on the iconic Uncharted video game series, will hit theaters nationwide on February 18.

After the release of the highly anticipated blockbuster of Spider-Man: No Way Home, Tom Holland takes on another iconic character, Nathan Drake, in the final trailer for the upcoming movie Uncharted. The highly-anticipated Sony Pictures adventure is based on the iconic Uncharted video game series, which has spanned over nine games.

Tom Holland stars alongside Mark Wahlberg as Victor ‘Sully’ Sullivan, as they go on a quest to find the legendary treasure of Magellan’s lost gold. The trailer begins with Drake looking at a map, saying he’s been, “dreaming of this my whole life, Magellan’s gold, the biggest treasure that’s never been found.” Sully tells him the treasure could be worth, ‘$5 billion, easy,’ as they get ready for their epic adventure.

However, Nathan wants to know what else Sully isn’t telling him as they get trapped by Chloe Frazier played by Sophia Ali, and Braddock played by Tati Gabrielle. “You have no idea who you partnered with, do you?” Chloe asks Nathan, as Sully tells him this will take ‘a little longer than I thought.’ Nathan asks Sully if they’re ’50-50′ partners, but Sully says that Nathan gets just 10%, ‘and that’s just me being generous.’

The trailer then features the thrilling action sequence that has been teased in clips and trailers before, where Nathan fights atop a string of cargo containers hanging out of a cargo plane. The trailer also features a shot of Antonio Banderas, who says that his family found, ‘the vulture’ but they were betrayed and there was ‘so much blood.’

The trailer also features a unique shot of two ancient ships being lifted out of the forest by helicopters, as Drake gets into a fight on these ships. As Sully asks if Drake if he’s still with him, he manages to pull himself back onto the boat and weakly answer, ‘Barely’ as the title card is shown. The trailer ends with Sully asking what’s with the cat and Nathan said he got it for him because his life seemed, ‘super sad.’ Uncharted hits theaters nationwide on February 18.