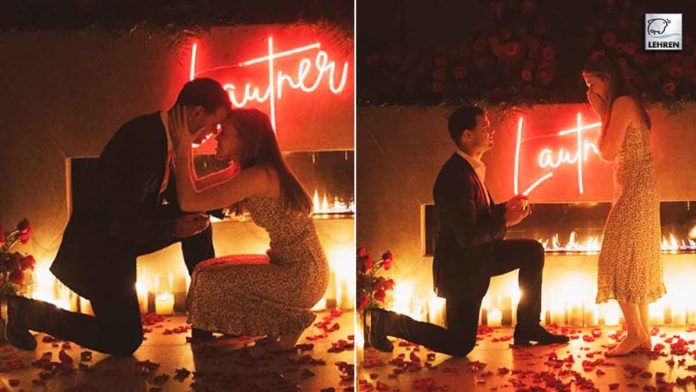 The couple was first spotted together at a wedding in 2018. Later, they made their relationship official.

Twilight star Taylor Lautner dropped down to one knee and asked longtime love, Tay Dome, to be his wife on Thursday during a romantic proposal. The 29-year-old actor looked fashionable in a suit and tie while his bride-to-be went barefoot for the romantic picture shared to Instagram on Saturday morning from the surprise engagement just days before.

Taylor Lautner shared two adorable pictures with his nearly seven million followers and captioned, “11.11.2021. And just like that, all of my wishes came true.” Tay looked completely in shock as she held her hands to her face while standing in a candlelit room surrounded by beautiful red roses.

Meanwhile, a neon red Lautner sign illuminated the pair from behind as Taylor held open a ring box for his soon-to-be wife, who is a registered nurse in the state of California. Tay Dome also shared snaps in her excitement with her followers as she professed her love for her new fiance.

She took to her official social media account to give a glimpse of the gorgeous photo from their special night while writing, “My absolute best friend. I CANNOT WAIT TO SPEND FOREVER WITH YOU.” However, Lautner quickly fired back by commenting, “Got news for you, the feeling is mutual.”

The loved-up couple was first rumored to be a thing in 2018 when they were spotted together at a wedding, They later went to Instagram to make their relationship official. Taylor found fame starring alongside Kristen Stewart and Robert Pattinson in the Twilight teen vampire saga. He later took his talents to television, starring in Scream Queens and Cuckoo, and will soon be back on the silver screen for the Happy Madison production of Home Team.