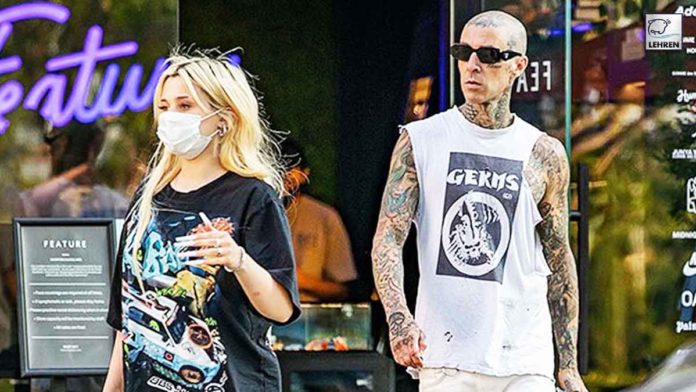 Travis Barker and his daughter Alabama were spotted doing a little shopping together on Sunday. They were wearing casual outfits, including graphic shirts.

Travis Barker was recently spotted spending some quality time with his daughter Alabama. A few days back he was in headlines for a fun trip in New York City with Kourtney Kardashian, 42. The doting dad was captured walking behind the teen. Alabama, 15 was seen carrying a shopping bag during a shopping trip and Barker appearing relaxed. She was spotted wearing a graphic black T-shirt with gray cropped leggings, and slip-on sandals during the outing. Travis choose to wear a white graphic T-shirt that had the sleeves ripped off, ripped eggshell-colored jeans, and black sneakers.

Alabama,15, also considered her safety by wearing a white face mask as her blonde locks were down. While Travis added sunglasses to his look. However, it is not clear that in which area the father and daughter duo were shopping, but they walked by onlookers on the sidewalk after leaving the stores.

Travis went on an outing with his daughter Alabama less than a week after he showed off his love with girlfriend Kourtney at the MTV Video Music Awards. The couple walked on the red carpet together and posed for ops while kissing at the event, making a lasting impression. The couple was looking stylish in black outfits. Travis dazzled in a black blazer and pants with spikes while Kourtney was wearing a black leather off-the-shoulder dress.

Before their NYC trip, Travis and Kourtney were seen having a great time at Halloween Horror Nights at Universal Studios in Orlando, FL. They were seen there with their kids including Alabama as well as Kourtney’s 11-year-old son Mason Disick, and Travis’ son Landon Barker, 17. “To say they were having a romantic date night would be quite the understatement,” a source told HollywoodLife about the outing at the time.