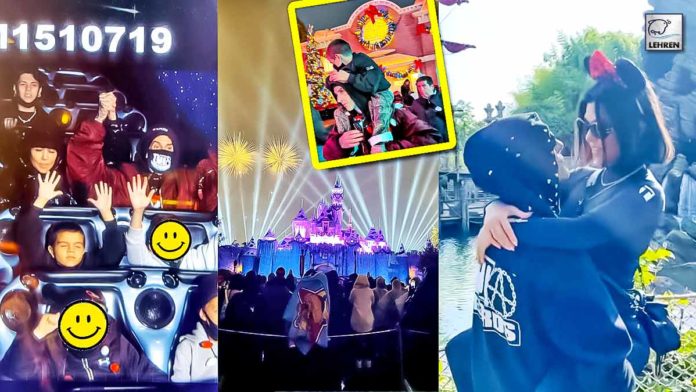 Travis and Kourtney took to their Instagram story to delight their multiple millions of followers with their recent visit.

Travis Barker and Kourtney Kardashian both took to Instagram on Thursday evening to share a series of photos from a recent trip to Disneyland. It’s no secret the two, 46 and 42, have a shared bond for the Anaheim, California amusement park, as they’ve spent much of their nearly yearlong romance there. The couple has often turned to social media to post memories from their fun-filled visits.

The series of photos was posted in each of their Instagram Stories for their multiple millions of followers to delight in. Travis shared a blurred photo of the character Sally from the 1993 Tim Burton film The Nightmare Before Christmas. Sally leaned over a tombstone in a detailed, orange-lit display. The next snap was of a mound of replica carved pumpkins with menacing expressions.

Then came a couple of tall angel statues that were crouched over as they held trumpets in their hands. The figures had carved pumpkins for heads, topped with halos. Barker notably is a big fan of the fantastical film, which marries Christmas and Halloween. His band Blink 182 referenced it in their 2004 hit song I Miss You. At the beginning of this month, Barker posted a photo of him and his fiancée kissing in matching skeleton sweats and captioned it, ‘Halloween on Christmas.’

However, recently Kourtney Kardashian shared photos of herself jamming out in a beige trench coat and black tank. Kourtney Kardashian looked every bit the rockstar while throwing a pair of drumsticks in the air while enjoying a music lesson from Travis Barker. The 42-year-old reality star captioned the slideshow, which showed her playing on a red Ludwig Drums set, “Little drummer girl.”

Meanwhile, the father-of-two, who proposed to Kardashian in late October, wrote under the slideshow, “Rockstar.” Barker’s passion for the drums seems to be rubbing off on the whole family after he gifted the Poosh founder’s daughter Penelope a drum set in July. However, Kardashian didn’t say whether the drum set was an early Christmas gift from her man.