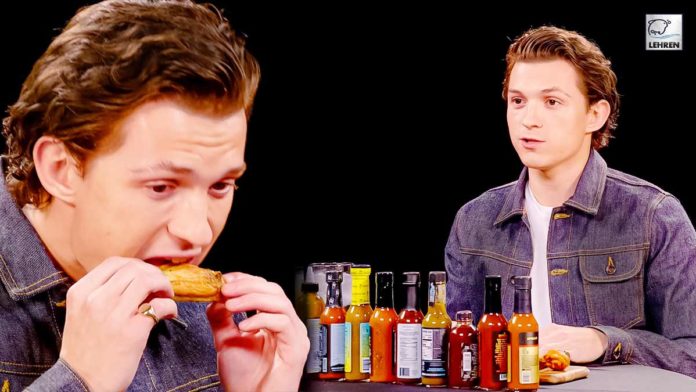 Tom Holland said the worst thing I've ever put in my mouth as he its a chicken wing dipped in Da Bomb Beyond Insanity sauce.

Spider-Man star Tom Holland triumphantly took on the ‘wings of death’ during the 16th season finale of First We Feast talk show Hot Ones, which dropped on Thursday. However, the 25-year-old star felt sick and uttered the F-word six times during the 27-minute interview, which was recorded on November 12. Tom groaned before heading to Staples Center, “I’m supposed to be going to a Lakers game tonight. I’m going to have to go and s*** after every quarter.”

Although, when Holland finished a chicken wing dipped in Da Bomb Beyond Insanity sauce, he called it “the worst thing I’ve ever put in my mouth.” “Wow, I feel so sick. I’m fantastic, man, I’m having the time of my life,” the former child star said sarcastically. “I feel like I just got, like, Botox but had no anesthesia or something. Not that I’ve ever had Botox and know what it feels like. That’s when the whole world is like, ‘He’s had Botox!'”

Moreover, Tom entertained the audience with stories like his failed audition for the role of reformed First Order stormtrooper Finn in Star Wars: The Force Awakens back in 2013. “I just remember thinking, ‘There’s no way this casting director is going to read the robot’s lines opposite me,’ just because that would be ridiculous,” Holland recalled. “And I don’t remember what my line was, but it was something like, ‘Let’s get back to the falcon!’ and this lady, bless her, would sit there with full commitment and be like, ‘Be-boop-be-boop.'”

The Cherry actor could not stop laughing and admitted, “I don’t think that’s the reason why I didn’t get the role, I think John Boyega was just better for the role than me.” Meanwhile, the show’s host Sean Evans asked Tom what his ‘holy grail’ favorite souvenir was from any set and he revealed it was actually something Robert Downey Jr. gave to his 17-year-old brother Paddy last year.

The 5ft 8in action star (Tom Holland height) was on Hot Ones to promote his role as Peter Parker in Jon Watts’ threequel Spider-Man: No Way Home, which will debut in the selected theaters on December 17. Tom further revealed that his ‘secret weapon’ to emoting with a mask on was to ‘pretend that my arms are dead.’