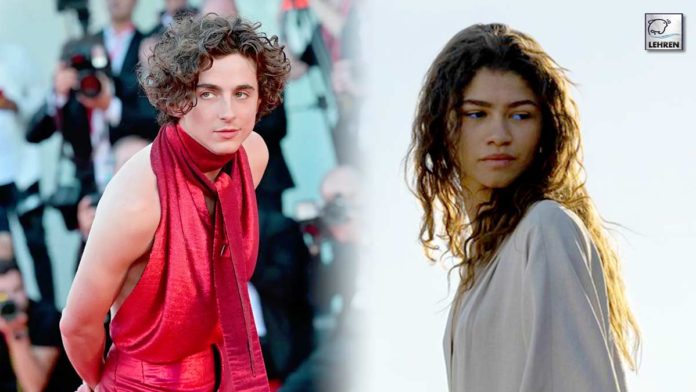 Zendaya starred as Chani, who bookends the film as a narrator and appears in snippets throughout in dreams of the protagonist Paul, played by Timothée Chalamet.

Zendaya had very less screen time in the hit film Dune. However, there’s good news for the fans who were left wanting more from her. In a recent interview with Variety, the actress’s costar Timothée Chalamet said Zendaya’s role in Dune: Part Two, due out next year, will be more significant than in the first film.

Chalamet shared with the outlet, “She hasn’t wrapped yet, and it’s amazing. She’s bringing exactly what she brought to the first one, which was incredible, but in greater abundance.” The Bones and All actor said Zendaya, ‘has really become a sister’ to him. “I’m so grateful to count her as a partner and a sister and a friend,” he said, adding that it’s “amazing” for the two to share stories about working with Luca Guadagino.

Luca also directed Chalamet in the upcoming Bones and All and Call Me by Your Name (2017), and Zendaya in Challengers, out next year. In Dune, Zendaya starred as Chani, who bookends the film as a narrator and appears in snippets throughout in dreams of the protagonist Paul, played by Chalamet. The two characters finally meet at the movie’s end, when she tells Paul, “This is only the beginning.”

However, director Denis Villeneuve explained to the Los Angeles Times in October 2021 that the first movie covers about half of the novel it’s based on, with more story to tell and more Zendaya to come as her character soon takes the forefront. Previously, He shared, “There are some characters that are less developed that I’m keeping for the second film that’s the way I found the equilibrium.”

He added, “We tried in this movie to stay as close as possible to Paul’s experience. Then, in the second one, I will have time to develop some characters that were left aside a little bit. That’s the theory. I hope it will work.” Legendary, the production company behind the film, confirmed around the same time that a second Dune instalment is in the works. It is slated for release on Nov. 3, 2023. Moreover, in his recent interview with Variety, the actor also heaped praises onto Florence Pugh, who joins the Dune cast for the upcoming sequel.

ALSO READ – Dune: Part 2 Will Not Release In October 2023, Check Out The New Release Date