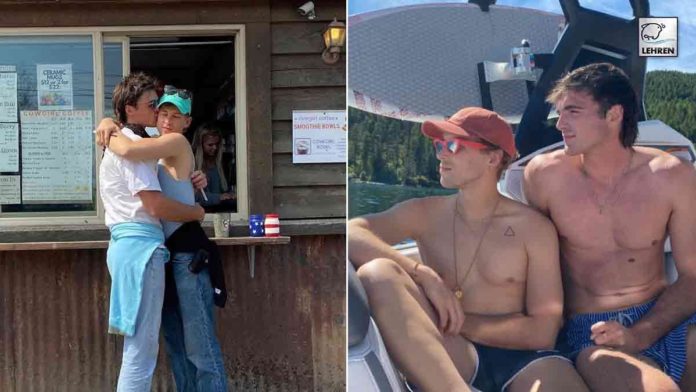 Tommy Dorfman shared a picture of Jacob Elordi kissing him on the cheek. The cute picture surely has taken bromance to the next level. Read below to know more.

The Kissing Booth fame Jacob Elordi and 13 Reasons Why actor, Tommy Dorfman have stunned their fans with the new post on Instagram. The two have set the internet on ablaze after sharing a platonic picture.

Jacob Elordi and Tommy Dorfman have become a trending topic on social media platforms. It has happened because Tommy shared a sweet picture of Elordi planting a kiss on his cheek. The two can be seen sharing a tight hug as they pose for the mushy picture

Tommy Dorfman shared the picture on his Instagram by letting the picture speak for itself. The caption below to platonic picture read, “♡ @jacobelordi.”

In the picture, we can see the two actors donning matching outfits in front of the cashier window. Jacob and Tommy can be seen wearing a t-shirt, blue denim paired with converse sneakers.

Jacob and Tommy’s twinning game make their fans speculate that all of it was pre-planned. Apart from the overall matching avatar, the two even had sweaters tied around their waist.

As the netizens nudge another angle of the potential pairing, Tommy and Jacob are nothing but simply friends.

Jacob Elordi is allegedly dating his Euphoria co-star Zendaya. However, neither of them has reacted to the rumours.

Tommy Dorfman came out as non-binary in 2017. He is happily married to Peter Zurkuhlen. Tommy and Petter tied the knot in 2016.

However, Jacob Elordi has never publically opened up about his sexuality.

On the work front, Jacob Elordi will star in The Kissing Booth 3. He will share the screen space with his ex-flame Joey King in Netflix’s beloved franchise.

Jacob Elordi and Joey King, the two sparked dating rumours back in 2018 during the release of The Kissing Booth. The couple allegedly called it quits in early 2019.