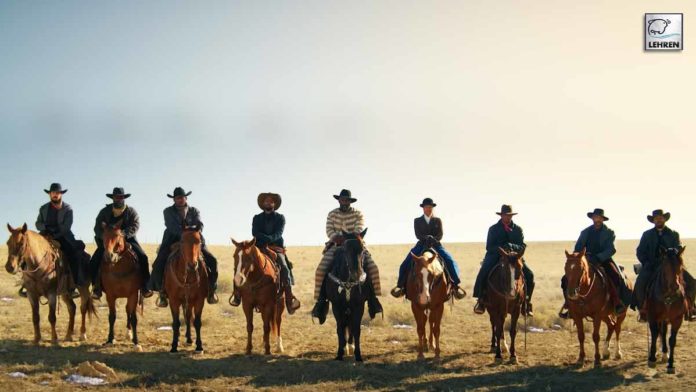 Netflix's upcoming action-packed movie, 'The Harder They Fall' will stream from November 3 on the streaming platforms and in selective theatres.

Netflix on Tuesday dropped the trailer of its upcoming multi-starrer The Harder They Fall. Through the trailer, the movie seems to be an out-and-out actioner.

The Harder They Fall also happens to be that rare western with a primarily black cast. The cast includes Idris Elba, Regina King, and LaKeith Stanfield. The Netflix movie also stars Jonathan Majors, Zazie Beetz, Delroy Lindo, Danielle Deadwyler, Edi Gathegi, R.J. Cyler, Damon Wayans Jr., and Deon Cole. If The Harder They Fall is not one of your most anticipated films of 2021, it certainly will become the one. Netflix is calling the film “a new school Western.”

The two-minute and sixteen seconds trailer teases a lot of gun slinging and gore, with some hierarchical politics at play. At one point in the trailer, Stanfield’s character says, “I don’t particularly enjoy violence.” However, the irony is that the trailer is nothing but full of violence. The film also looks slickly shot.

The synopsis of The Harder They Fall from Netflix reads, “When outlaw Nat Love (Jonathan Majors) discovers that his enemy Rufus Buck (Idris Elba) is being released from prison he rounds up his gang to track Rufus down and seek revenge. Those riding with him in this assured, righteously new school Western include his former love Stagecoach Mary (Zazie Beetz), his right and left-hand men – hot-tempered Bill Pickett (Edi Gathegi) and fast drawing Jim Beckwourth (R.J. Cyler) and a surprising adversary-turned-ally.” It continues, “Rufus Buck has his own fearsome crew, including ‘Treacherous’ Trudy Smith (Regina King) and Cherokee Bill (LaKeith Stanfield), and they are not a group that knows how to lose.”

The Harder They Fall is directed by Jeymes Samuel, who was behind the 2013 short film They Die by Dawn, a Western starring Rosario Dawson, and Giancarlo Esposito. The writer-director Samuel wrote The Harder They Fall with Boaz Yakin, best known as the director of Remember the Titans and screenwriter of Now You See Me.

However, in addition to co-writing and directing, Samuel also produced the film with Jay-Z, James Lassiter, and Lawrence Bender. The latter is famous for his collaborations with Quentin Tarantino, such as Reservoir Dogs, Pulp Fiction, and Inglourious Basterds. Bender credits include three Oscar nominations for Best Picture for Pulp Fiction, Good Will Hunting, and Inglourious Basterds.

The Harder They Fall will release on Netflix on November 3 after having its world premiere at the London Film Festival next month.

Watch the official trailer below: