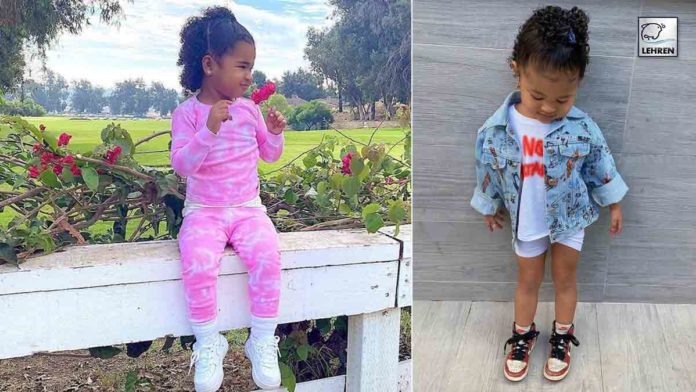 Stormi Webster and her cousin True Thompson enjoy celebrating Thanksgiving by eating ice cream and giggling around. Watch the video below.

The festive seasons have already begun and the Hollywood celebs are gearing up for it alongside their families. Thanksgiving just went by and many of the celebs posted their celebration on their social media handles. The KarJenner clan also shared her Thanksgiving celebrations and it’s everything cute. The KUWTK stars celebrated the day with her daughter and sisters. In one of the videos shared by Khloe Kardashian, we can see her daughter True Thompson giggling with her cousin Stormi Webster while celebrating Thanksgiving eve.

In the video shared by the 36-year old, we can see the cousin sister duo running in circles. Stormi and True are giggling around while eating ice cream bars on Thanksgiving eve. The two are not doing any mess as they play around. Stormi adorably followed True as the latter raced back and forth in front of Khloe.

We can clearly hear the song Barbie Girl by Aqua playing throughout the house in the video. It comes as s surprise that Stormi and True’s outfit for the day is on fleak. The former is wearing an adorable pleated white dress. She has accompanied it with black boots with her hair up in a little ponytail.

On the other hand, True is donning a white long-sleeved shirt and denim skirt. Her hair is tucked in a cute bun.

As per the reports, the KarJenner spent their Thanksgiving evening at momager Kris Jenner’s place this year. Khloe Kardashian brought in some self-baked Oreo cupcakes, and monkey bread. While her elder sister Kourtney Kardashian brought chips and dips to the table.

The many videos out on social media are proof that the Kardashians had a blast on Thanksgiving eve.