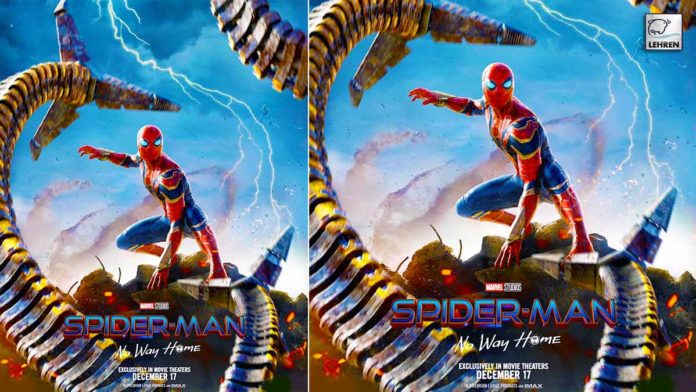 Tom Holland will reprise his role as the friendly neighborhood web-slinger in the latest installment of Spiderman.

Sony has released the first official poster for Spider-Man: No Way Home on Monday. The poster lit up the web with several clues sneaking in the background for the upcoming follow-up to 2019’s $1.13B global grosser, Spider-Man: Far From Home.

Meanwhile, the official Spider-Man: No Way Home tweeted “Go ahead, zoom in on those details.” The tweet suggests that other than Goblin, there are more villains as well. Anticipation is sky-high on the latest installment of the Spiderman franchise that sees Tom Holland reprise his role as the friendly neighborhood web-slinger.

However, the first trailer was dropped in August this year which racked up an-all time record of 355.5M views worldwide in its first 24 hours, surpassing the previous record-holder, Disney and Marvel’s Avengers: Endgame. Spider-man: No Way Home is expected to go where no other picture in the Spiderman franchise has ever gone, interweaving with the Disney/Marvel Cinematic Universe’s grand multiverse plan. It also will see the return of Alfred Molina’s villain Doc Ock from the 2004 Tobey Maguire-starrer Spider-Man 2.

The poster released recently sees Holland’s Spider-Man surrounded by Doc Ock’s tentacles while in the background there’s an image of the Green Goblin, Willem Dafoe’s villain who last appeared in Spider-Man 2. The stroke of lightning could be a nod to Jamie Foxx’s Electro from The Amazing Spider-Man 2. And, a cloud of what looks to be sand could signal the reappearance of Spider-Man 3’s Sandman aka Thomas Hayden Church.

The synopsis reads that for the first time in the cinematic history of Spider-Man, our friendly neighborhood hero is unmasked and no longer able to separate his normal life from the high-stakes of being a superhero. When he asks for help from Doctor Strange played by Benedict Cumberbatch, the stakes become even more dangerous, forcing him to discover what it truly means to be Spider-Man.

Spider-Man: No Way Home is directed by Jon Watts and hit the theatres on December 15 and debuts in North America on December 17, exclusively in movie theaters.