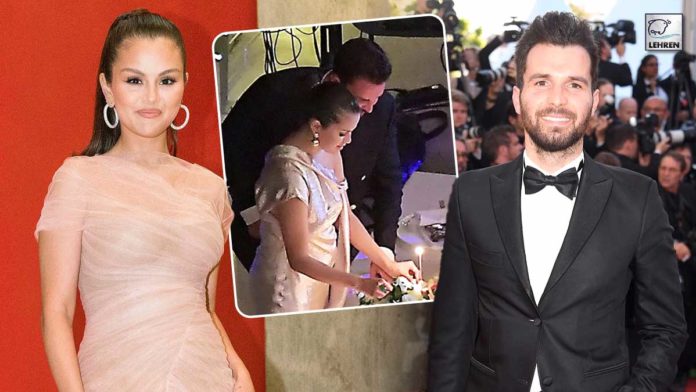 Selena Gomez's rumoured boyfriend, Andrea Iervolino, stands by her side while she blows the candles and helped her in cutting the cake.

Selena Gomez had an amazing 30th birthday bash and the photos from her recent party in Italy are getting viral on social media. In the photos, the songstress looked happier than ever as she blew out a chocolate birthday cake while surrounded by her closest loved ones during her vacation on the Amalfi Coast.

After enjoying some fine Italian dining at the Torre Normanna Restaurant, the Only Murders in the Building actress danced the night away with friends and her rumoured boyfriend, Italian movie producer Andrea Iervolino. She and her possible new love interest, who was seen kissing her head at one point as they hugged, even shared a dance as she showed off her moves in a figure-hugging ivory gown.

The birthday girl donned an elegant one-shoulder party dress to continue to ring in turning 30. Her hair was styled in a chic-up do, showing off a pair of large, gold earrings. The talented actress was seen with an excited expression on her face as she held a delicious-looking chocolate cake. She was later seen blowing candles to another three-tiered cake layered with an assortment of fruit.

Selena Gomez’s boyfriend (rumoured) stand by her side while she blow the candles and helped her cut the cake. One photo showed her potential beau cheering her on as she made a birthday wish. Another snap caught the producer holding Selena in an affectionate embrace. As she was surrounded by her loved ones and closest friends, the singer decided to keep the festivities going by dancing to some tunes with a cocktail in her hand.

Before landing on the Amalfi Coast, the former Disney channel actress recently celebrated her 30th birthday with a previous party with her celebrity friends such as longtime bestie, Taylor Swift. The beauty appeared to be finishing off a yummy meal with friends occasionally coming up to the star to wish her a belated birthday.

At one point as Selena and a few pals were dancing the night away, they were seen grabbing their napkins and waving the fabric in the air. Her rumoured boyfriend seemed to have a blast and stuck close to the successful entertainer throughout the evening. While the photos are a little blurred, some fans claimed that the man in the photos is Chris Evans, with whom the actress was previously rumoured. Check below the photos of Selena Gomez and her alleged boyfriend, Andrea Iervolino.