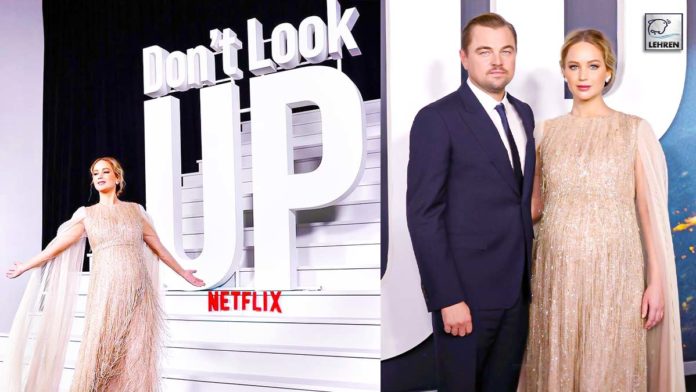 The Hunger Games star previously put her baby bump on display last month at an intimate screening for the upcoming movie.

The soon-to-be mom showed off her baby bump in a stunning gold gown at the star-studded Don’t Look Up premiere in New York City on Sunday. Jennifer Lawrence, who is expecting her first child with art gallerist Cooke Maroney, dazzled in a glittering floor-length fringed gold gown at the gala event held at Jazz at Lincoln Center.

The actress, who also posed with co-star Leonardo DiCaprio at the premiere, walked the red carpet in a sparkly Dior number, complete with semi-sheer cape sleeves. The actress, 31, accessorized her stunning ensemble with Tiffany & Co. jewelry and kept her hair effortlessly pulled back. While DiCaprio donned a fitted navy suit.

However, The Hunger Games star previously put her baby bump on display last month at an intimate screening, Q&A, and reception at the Ross House in Los Angeles for the upcoming movie, which debuts in select theaters on December 10 and will release on Netflix on December 24.

Meanwhile, in a wide-ranging cover story for the December issue of Vanity Fair, Lawrence opened up about her baby on the way and the boundaries she’s setting as a mother. The Oscar winner, who is currently expecting her first baby with husband Cooke Maroney, said that while she’s “grateful and excited” to become a mom, she wants to keep her child out of the conversation.

ALSO READ – ‘Don’t Look Up’ Teaser Arrived: Leonardo And Jennifer Out To Save The Planet

Not seen at the event was Lawrence’s husband Cooke as they have been together since 2018 and got engaged the following year. They went on to exchange vows in October 2019 with a ceremony in Rhode Island. However, in September, the Winter’s Bone star set pregnancy rumors flying when she was seen in New York in a pair of floral overalls with a noticeable baby bump, and a representative quickly confirmed that she was expecting her first child.

Don’t Look Up is written and directed by Adam McKay. The movie is centered around two low-level astronomers Dr. Randall Mindy, played by DiCaprio, and Kate Dibiasky, played by Lawrence who must go on a giant media tour to warn mankind of an approaching comet that will destroy planet Earth.