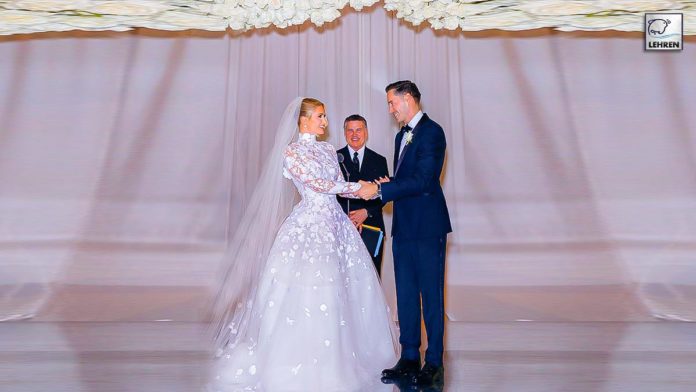 Paris Hilton is married now, and it seems she couldn't be more excited about it.

The reality television star married her new husband Carter Reum in a ceremony last Thursday at the Bel-Air estate of her late grandfather Barron Hilton. Meanwhile, after a weekend chock-full of wedding events, the Paris Hilton shared a series of photos from the wild weekend that was along with a caption that revealed how excited she truly is.

The Cooking With Paris star wrote, “Standing hand in hand at the altar, my heart skipped a beat. It was one of the most incredible magic and loving feelings I’ve ever felt in my life. I had found my missing piece.” “To me, you’re more than my husband. You’re my best friend, my teacher, my lover, my confidant, and the father of our future children. I am so proud to stand beside you as your wife,” she added.

Hilton completed her message of love by writing, “There was a piece of me that always felt I had to go on this journey of life by myself, but now I know the stars were just aligning for us to find each other again. I’m so excited for the future we will create together.” However, a number of famous friends congratulated the reality television star in the comments.

Model Chantel Jeffries commented “unreal” while adding a series of hearts and an emoji with hearts in its eyes. Jersey Shore star Snooki penned, “Gorgeous! Congrats bewwww” while Sugar Rush host Hunter March wrote, “Looking forward to getting all the post-wedding details on the podcast tomorrow. Congrats Paris.”

The House of Wax actress shared three photos in which she stood on the altar and held hands with her spouse while wearing her custom Oscar de la Renta dress. The happy duo was surrounded by white flowers in the snaps while smiling adorably at one another. Reum and Hilton celebrated their wedding in style including a star-studded celebration on Saturday night which saw the couple party with a number of famous faces.

Singer-songwriter Macy Gray performed for all of those in attendance which included actress Emma Roberts, actor Jaden Smith, reality star Kyle Richards, Kim Kardashian, and many other celebs. However, after their actual wedding ceremony, the biggest event of the couple’s event came on night two when the couple took over the Santa Monica Pier for a night of rides, games, and a performance by the disc jockey Diplo.