Nikki Exotika- From A Teen Boy To A Living Barbie Doll! 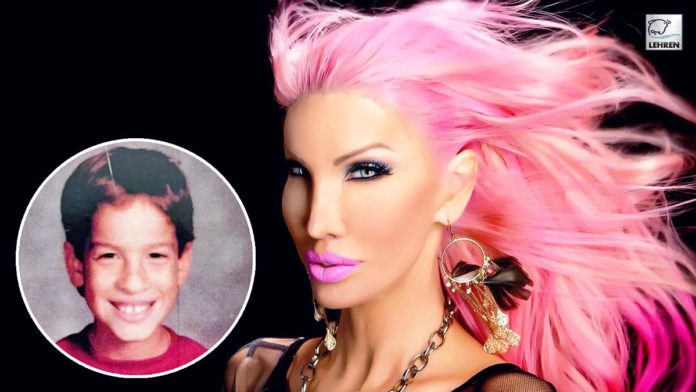 Nikki, who flaunts as a 'living barbie doll' was once a teen boy, read to know her whole story and what tempted her to do what she did!

Trolling and bullying at a tender age sure takes a toll on anyone’s mental health, but to what extent? Meet Nicole Sanders aka Nikki Exotika, singer and internet sensation, known to be the ‘Living barbie doll’. Nicole apparently has spent a whooping £750,000, on endless cosmetic surgical procedures risking his life, to become Nikki. Nikki, a transsexual, has spent around 2 decades of her life, quite under the knife to become a living version of a barbie doll.

Nikki, who was assigned a ‘male’ at birth, knew she was indeed different from kids her age, as she found herself always putting on make up and painting her nails since the age of two. Roughly two years later, she found herself immensely obsessed with barbie dolls, an obsession that only kept growing on her as she aged. In her school, her dressing sense made her a victim of several homophobic attacks, as well as she got beaten up for the same. But none of that ever stopped Nikki from doing what she loved doing the most.

Nikki has always had a strong opinion about her body, and always considered how she was born in the wrong body. Idolizing barbie dolls and celebs like Madonna, she indeed, wanted to become like them. “I would get reprimanded for playing with my cousin’s dolls at four years old, even then I wanted to look like Barbie, it was always my dream,” she said. “Then small things like I would always sit-down when I went to the bathroom, I never stood up, it felt like I was born with the wrong genitals even at that age.”

She said: “I started using concealer in middle school and a little pencil to draw on my eyebrows, I would go in all pretty and nice, my nickname was ‘cover girl’.”I was bullied every single day at school and after school, I was always feminine, I would hike my shorts up and wear tight shirts and ‘pretty boy’ make-up.

“Some guys were nice and defended me in school but most of the jocks called me a “faggot’ pushed me into the lockers, punched, tripped, spit amongst other things.”No matter how many times I was beaten up after school or in the locker room, I never gave up on being myself and living the way I have always felt inside.”

At the age of 19, Nikki decided to take illegal hormone injections, the ones known for modifying the body’s hormone productions, to achieve her dream of becoming a barbie doll. After a gender reassignment surgery, adam’s apple reduction surgery, two breast implant surgeries and three nose jobs, in the last 20 years, Nikki has tried every trick in the book, right from voice therapies to lifts and tucks and then fixing blotched surgeries to achieve her dream of becoming a living barbie.

“My body has had gallons of silicone, I’ve spent a lot on changing everything from my head to my toes, breasts and body. I didn’t just want to be pretty, I wanted to be gorgeous, stunning, the ultimate – I never wanted to be the girl next door I wanted to be the sexy b**** down the block,” she said.

What is Nikki doing now?

For the unversed, Nikki was a part of America’s first transgender pop group, ‘Secret Girls’, and now is a soloist singer. She recently opened up about her quest for a perfect Ken-like looking man, who’d compete in her love life and is also a proud mom of 3 gay sons. “I’m still optimistic on the relationship front, hopefully, one day I’ll find my Ken – I’m looking for a tall, superhot, straight muscular man, I love tattoos and pretty boys that look like Ken Doll,” she shared.