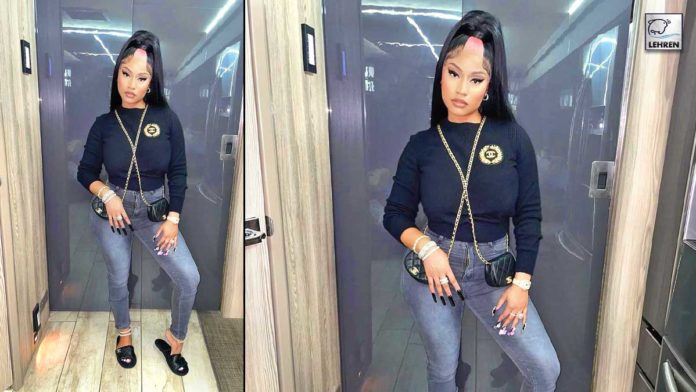 Rapper Nicki Minaj flaunts a bright pink bob wig and colorful heels. While posing for video, her foot adorably falls out of her shoe but she heads back.

Nicki Minaj put the social media on fire with new snaps. She dazzled in her body front and center in a plunging yellow bodysuit. The Bed Rock singer, 38, left little to the imagination as she posed up a storm in a slideshow she posted to Instagram on Tuesday.

The first two snaps of the post showed Nicki flashing major cleavage while wearing a bright pink bob wig and colorful heels. The Starships singer showcased her fabulous legs while teetering on her arty footwear beside a cabinet full of plates. She looked flawlessly done up with a winged slick of eyeliner giving her makeup a bit of drama. And further upping the glam factor, she rocked a colorful, claw-like manicure.

The final part of the post was a video of Nicki posing by her pool in a backyard. She gushed confidence. Meanwhile posing for video, her foot adorably falls out of her shoe mid-pose but she heads back and flaunts her look. She captioned the post, “What’s ya name B.O.B. so they callin you BOB? Stop playin n!$&@ you know dat I’m known for the BOB…playin dress up last week…” adding several emojis.

However, her recent post came after Nicki doubled down on her row with Leigh-Anne Pinnock – accusing the star’s fans of ‘bullying’ Jesy Nelson. The rapper took a swipe at Leigh-Anne on an Instagram live on Monday, after Leigh-Anne reportedly accused Jesy of ‘blackfishing’ in leaked messages. In the live stream, Nicki accused the girlband star of trying to ruin Jesy’s new solo career and branded the new mother and the rest of Little Mix ‘jealous miserable clowns’.

After her comments caused a stir on social media, Nicki doubled down on her remarks in a tweet. She took aim at Leigh-Anne’s ‘messy’ fans and accusing them of having a negative impact on Jesy’s mental health. Jesy has spoken candidly about her mental health battles in the past, and revealed in her 2019 BBC documentary, Odd One Out, that she attempted suicide after being subjected to vicious trolling. Following a backlash over the live stream chat, Trinidadian-born rapper Nicki noted Jesy’s mental state and tweeted in her support.