Netflix’s ‘To All the Boys’ Franchise Is Getting Spinoff Series Titled ‘XO, Kitty’ 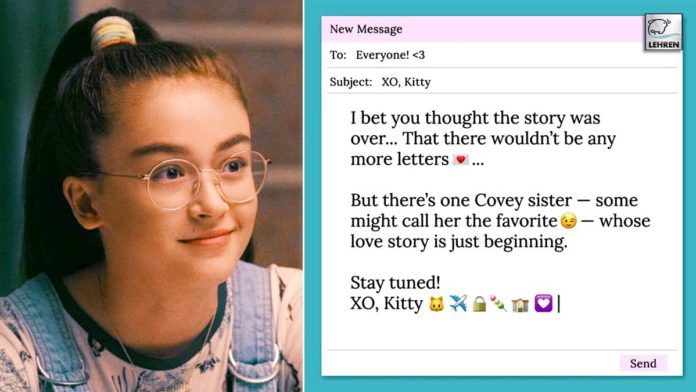 Netflix announced a ten-episode order for a To All The Boys spinoff rom-com series starring Anna Cathcart reprising her role as Kitty Covey.

Netflix confirmed that To All the Boys I’ve Loved Before franchise is getting a spin-off named XO, Kitty. The streaming giant announced the news on Monday that it has picked up a ten-episode order of a new young adult series titled XO, Kitty, which is a spinoff of the popular To All the Boys I’ve Loved Before trilogy of films that were earlier released.

The new show will move around the character of Kitty Song Covey, To All the Boys central character Lara Jean’s (played by Lana Condor) little sister (played by breakout star Anna Cathcart). The new series will follow teen matchmaker Kitty as she moves halfway across the world to reunite with her long-distance boyfriend, soon realizing that “relationships are a lot more complicated when it’s your own heart on the line,” according to Netflix.

The spinoff series will be starring Descendants star Cathcart, 18, will take the form of ten 30-minute episodes. Han billed as the creator of the dramedy series, will act as co-showrunner alongside Sascha Rothchild. Han and Rothchild will co-executive produce with Matt Kaplan of ACE Entertainment. The pilot for XO, Kitty was co-penned by Han and Siobhan Vivian. The official Twitter handle of the To All The Boys franchise posted a video announcing the new show, along with the caption, “The story isn’t over just yet. XO, Kitty, a spinoff series starring @annacathcart inspired by To All the Boys is on its way to Netflix.”

To All the Boys I’ve Loved Before is the adaption of the best-selling book series by Jenny Han, was released in 2018 and was a big success for the streamer, leading to sequels To All the Boys: P.S. I Still Love You in 2020 and To All the Boys: Always and Forever earlier this year. With the rising star power of Laura Condor, Noah Centineo, and Anna Cathcart, the franchise was a huge success for Netflix, beating out several of their other summer romantic comedy from 2018.

The first installment films follow high school junior Laura-Jean Covey in her misadventures in fake dating Peter Kavinsky (Centineo) when a series of letters she’s written to boys she’s loved in the past get mailed to their recipients by her younger sister Kitty. The two following films remain focused on Laura-Jean and Peter’s relationship as complications from other letters arise and what the couple’s future looks like as college approaches.

However, Kitty became a fan favorite from the films, especially as her character grew in prominence as the franchise continued, even leading some fans to think Kitty deserved to be the focus of any future franchise films. The youngest Covey wears many hats, including matchmaker and confidant, while maintaining the brash, unapologetically weird but loving younger sibling archetype. This may be the reason that the franchise is bringing a spin-off for the audience.