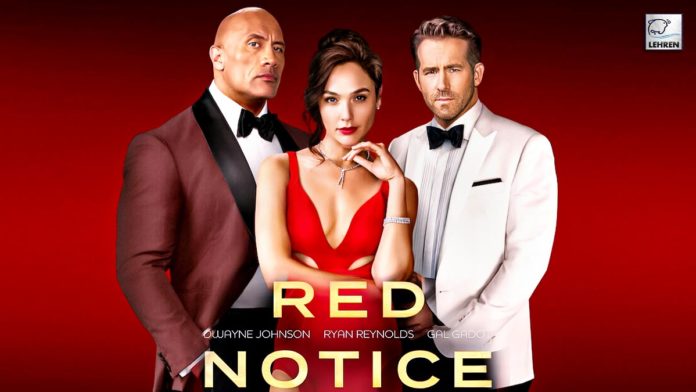 Netflix has delighted Red Notice fans with two more sequels of the movie. Netflix is in the works to produce two back-to-back sequels for Red Notice, which is expected to begin production in 2023, according to Deadline. The outlet reported that movie director Rawson Marshall Thurber has already begun writing.

“The plan is to bring back the star trio and add new characters to flesh out a heist-film ensemble reminiscent of the starry Ocean’s Eleven franchise,” the outlet reported. Red Notice starred Dwayne ‘The Rock’ Johnson, Gal Gadot, and Ryan Reynolds in the action-comedy movie. The plot of the movie follows an Interpol agent attempting to hunt down and capture the world’s most wanted art thief.

However, Red Notice is not only the action movie that has the biggest opening day and becomes Netflix’s number one film, but it was also the most expensive movie Netflix has ever done, costing the studio $200 million. Back in November, Dwayne took to his Instagram to thank all of his fans for helping the hit Netflix movie become their number one film, replacing Bird Box.

The 49-year-old former WWE wrestler Dwayne Johnson posted a video to Instagram along with a caption praising his new movie’s success. In the video, The Rock raises a glass of his tequila Teremana to his followers who have watched the movie and thanks to them for their support. “Guys, you have turned Red Notice into a truly iconic, global, and cultural phenomenon,” he said during his speech. “In just 11 days, you have made Red Notice the biggest movie in the history of Netflix.”

Fast and Furious star went on saying, “Like an unstoppable force, you are also making Red Notice the most-watched property in the history of Netflix in film or in television.” Dwayne then raised the toast to his followers before taking a sip and saying, “That is good sh*t.” Meanwhile, Ryan Reynolds responded to the news in a tweet penning, “WOW #RedNotice is Netflix’s biggest ever opening day for a film. Congrats to this whole team! Can’t wait for Red Notice (Taylor’s Version).”