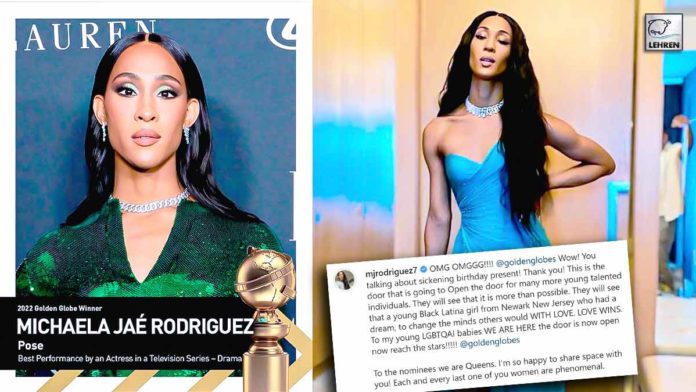 Michaela Jaé ‘MJ’ Rodriguez has recently made history as she became the first trans woman to win a Golden Globe, claiming the honors for Best Actress in a Drama Series for her work on Pose.

Taking to Instagram, Michaela showed her excitement and wrote, “OMG OMGGG!!!! @goldenglobes Wow!” As she celebrated her 31st birthday just two days before, she continues, “You talking about a sickening birthday present! Thank you!” The Newark, New Jersey native took pride in the milestone, predicting, “This is the door that is going to open the door for many more young talented individuals. They will see that it is more than possible.”

Michaela further penned, “They will see that a young Black Latina girl from Newark New Jersey who had a dream, to change the minds others would WITH LOVE. LOVE WINS.” Rodriguez, who played the role of Blanca Rodriguez on the FX series, continued: ‘To my young LGBTQAI babies WE ARE HERE the door is now open now reach the stars!!!!!’

Rodriguez emerged victorious from a category that included Uzo Aduba for In Treatment, Jennifer Aniston for The Morning Show, Christine Baranski for The Good Fight, and Elisabeth Moss for The Handmaid’s Tale. “To the nominees we are Queens,” Rodriguez said in the social media post. “I’m so happy to share space with you! Each and every last one of you women is phenomenal.”

The win also marked the first Golden Globe victory for the series in its three-season run, as the series, created by Steven Canals, Brad Falchuk, and Ryan Murphy, debuted in 2018 and aired its final season last year. She previously made history last year in becoming the first transgender entertainer to receive a leading actress Emmy nomination, but The Crown’s Olivia Colman won the award.