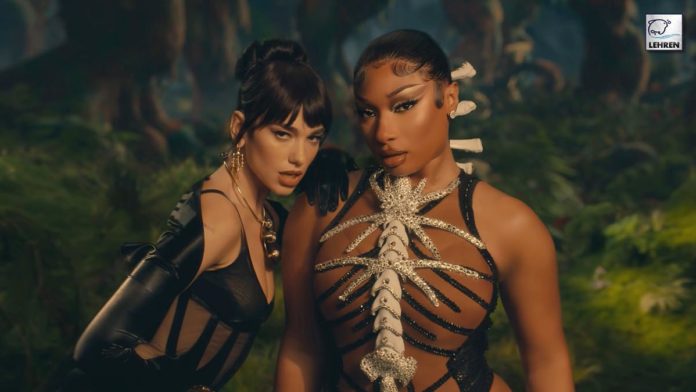 Previously, Megan Thee Stallion shared a shot of four cakes, two with her image and two with Dua Lipa.

Megan Thee Stallion and Dua Lipa have recently taken to Instagram to tease the debut of their upcoming single Sweetest Pie with a sneak preview of the video. And on Friday, the official video of their collaboration has released. While sharing the teaser, Megan Thee Stallion wrote in an Instagram post, “#SWEETESTPIE OUT AT MIDNIGHT BE READY.” Meanwhile, Dua Lipa, penned, “So excited I’m crying sugary icing out of my tear ducts!!!!!!”

In a clip of the video for the track, which was directed by Dave Meyers, the Houston native was seen in a black leather ensemble with a plunging top with a black hat with a large brim. In one scene in the video, the musical artist donned a multi-level gold choker as she danced alongside Lipa. Dua Lipa donned a black gown with gold embellishments and a large golden headpiece.

In another sequence, Megan is seen lunging forward as hands flashing a middle finger are seen springing out of her eyes. Megan has been heavily promoting the release, which has a candy theme, throughout the week on her social media. Previously, she shared a shot of four cakes, two with her image and two with Dua Lipa. She also shared a series of shots with her white hair styled up with sprinkles, while holding a pink cupcake.

Previously, the shared a clip that showed her and Lipa practicing the choreography for the video for the upbeat song. Megan and Lipa also have a promotion linked with the single titled ‘Thee Sweetest Pie Nail Pop Up,’ which will offer fans who pre-order the single a chance to have their nails done in the ornate styles seen by the superstar singers in pop-up shops in her native Houston, as well as New York City and Los Angeles.