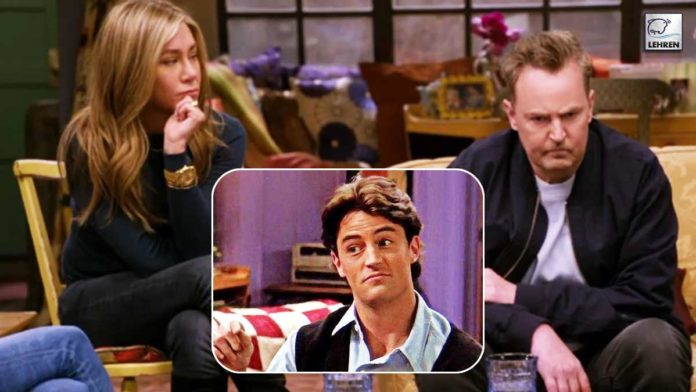 Matthew Perry aka Chandler Bing admitted in a BBC interview, “I ​don't remember three years of it. I was a little out of it at the time — somewhere between seasons three and six.”

The trailer of the much-awaited Friends Reunion is finally out and is breaking the internet for obvious reasons. You might need “tissues” as you watch this nostalgic ride.

Friends is undoubtedly the most popular sitcom around the world. It first aired in 1994 and after running ten successful seasons, it came to an end in 2004. But even after all these years, the show’s popularity has only grown manifolds. The show stars Jennifer Aniston (Rachel), Courteney Cox (Monica Geller), Lisa Kudrow (Phoebe Buffay), Matt LeBlanc (Joey Tribbiani), Matthew Perry (Chandler Bing) and David Schwimmer (Ross Geller).

Even though the Friends Reunion will bring back many memories, this won’t be the case of actor Matthew Perry. Matthew played Chandler Bing from 24 to 34 years of age. And undoubtedly, he made big money in these ten years.

He once said in an interview, “I desperately — desperately — needed the money.” And once he was on the show, his financial probems were solved.

For the first season, the six cast members made $22,500 an episode, which grew to $75,000 by season three and eventually $1 million per episode in seasons 9 and 10. While Chandler Bing was making the world laugh through his sarcasm and comic timing, he had a very lonely time in his personal life. He seemed to have everything in his life, yet he wasn’t happy.

Matthew said, “From an outsider’s perspective, it would seem like I had it all. It was actually a very lonely time for me because I was suffering from alcoholism.”

Due to his addiction, he doesn’t remember filming three whole seasons of the show. Perry admitted in a BBC interview, “I ​don’t remember three years of it. I was a little out of it at the time — somewhere between seasons three and six.”

Talking about achieveing success at such a young age, Perry said, “When it happens, it’s kind of like Disneyland for a while. For me, it lasted about eight months, this feeling of ‘I’ve made it, I’m thrilled, there’s no problem in the world.’ And then you realize that it doesn’t accomplish anything, it’s certainly not filling any holes in your life.”

Things were still under control when he was an alcoholic. He even spent 28 days in rehab in 1997 but didn’t stay sober for long. His life changed after a Jet Ski accident in 1997. When he met with an accident, he was prescribed Vicodin and eventually, he became addicted to it.

Matthew said in 2002, “But from the start, I liked how it made me feel and I wanted to get more.”

In May 2000, he was admitted to a hospital in Los Angeles for pancreatitis, an inflammation of the pancreas from alcohol abuse. It is a condition that can be potentially deadly.

Even an incident like this wasn’t a wake up call for him. He told, “Unfortunately, that still wasn’t enough to get me to quit drinking.”

This was a battle Matthew had to fight alone. Matt LeBlanc aka Joey tried to help Matthew but it didn’t work out. Matt says, “I tried to talk to him. There wasn’t a response. It’s such a personal struggle; they need to bottom out on their own.”

Lisa Kudrow said, “When Matthew was sick, it was not fun. We were just hopelessly standing on the sidelines. We were hurting a lot. Matthew is one of the funniest people I’ve ever met in my life. He’s charming and hilarious. Most of our hard laughs came from Matthew.”