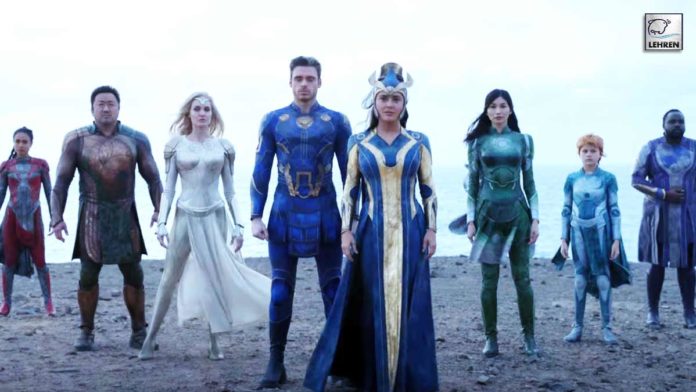 Marvel Studios recently reveals has now confirmed that the movie's plot will be split into two different time periods.

Marvel Studios has recently confirmed that the events in their upcoming movie Eternals will take place across two different time periods. According to Comic Book, a new press release, which has been circulated by Disney has said that the movie will deal with a ‘past’ and a ‘present’ time period.

The press release reveals through Comic Book that “The story takes place across two time periods. One storyline is set in the past when they operated as a formidable team and a close family unit.” The press release also notes that in the present timeline, the group members have split into distinct places, while they are ‘content to live among humans, hiding in plain sight.’ “The prevailing threat of the Deviants, which once again threatens the existence of mankind, means the Eternals need to put their differences aside and regroup,” the press release further stated.

Marvel producer Nate Moore has opened up on the movie’s plans to explore ‘a corner’ of the Marvel Universe that hasn’t been shown to the audience as yet. She stated, “We want audiences to discover a corner of the Marvel universe they’ve never seen before… We want them to discover a mythology that is a challenging sci-fi movie but also has a human heart. And we want them to meet ten heroes who they hope can relate to.”

However, on Sunday, Marvel has released an Eternals teaser trailer. The trailer moves around the main cast who fights the Deviants while safeguarding humanity and looking as cool as ever. The trailer, packed with brilliant fight scenes between the Eternals and the Deviants has really set the mood for the movie.

The entire cast including Salma Hayek as the lead stands in a ‘godly manner’ while introducing themselves. Gemma Chan’s Sersi can be heard saying, “We’re Eternals. We came here to protect humans from the Deviants.” “When you love something, you fight for it,” adds Angelina Jolie’s Thena, while some extremely action-packed scenes go on in the background. When warlord Kro warns Thena about her fate as a part of the Eternals, she fights back with more vigor, stating, “Let’s finish this.”

The movie is slated to release on November 5. Directed by Chloé Zhao, the movie stars Angelina Jolie as Thena, Richard Madden as Ikaris, Kit Harington as Black Knight, Gemma Chan as Sersi, Salma Hayek as Ajak, Don Lee as Gilgamesh, Kumail Nanjiani as Kingo, Barry Keoghan as Druig, and Lauren Ridloff as Makkari, among others.