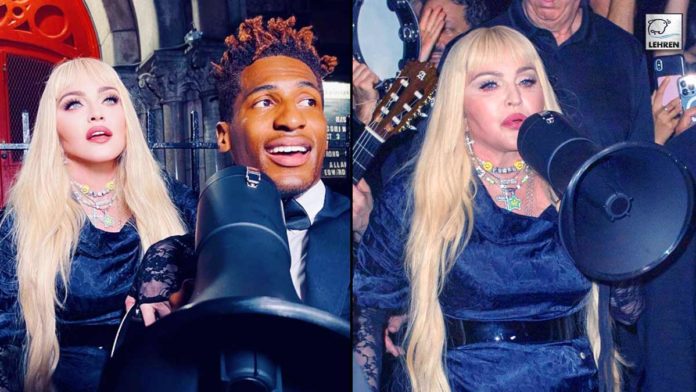 The Queen of Pop took to the streets of New York after performing a secret gig at Ginny's Supper Club in Manhattan.

Madonna flaunts her natural look in a rare public outing which left her army of fans amazed. The Queen of Pop took to the streets of New York after performing a secret gig at Ginny’s Supper Club in Manhattan.

After exciting fans with a mind-blowing performance in the intimate venue below the Red Rooster restaurant, 63-year-old Madge took to the streets of Harlem showing off a rare filter-free look. The superstar singer performed her hit song Like a Prayer on the steps of a local church with a choir in tow for good measure.

Madonna put on a black fitted dress with black gloves. She embellished her look with sparkling jewelry. Madonna dazzled the floor and some of her fans insisted the star doesn’t need to share heavily-filtered snaps on social media because she looks great in real life. One Instagram user wrote, “Who said Madonna doesn’t look good without filters?” “Just look at this beautiful woman Looking this good at 63,” added another, pointing to photos from the entertainer’s recent appearance on The Tonight Show with Jimmy Fallon.

However, some fans took aim at the singer-songwriter for her usually-filtered image and mocked, “Real life vs Instagram,” alongside side-by-side photos of the singer. Another critic wrote, “Madonna, Reality Vs the pic she posts of herself on Insta..” Madonna’s latest stunt comes not long after she raised eyebrows as she flashed her bottom during what has been called a ‘trainwreck’ interview on US TV last week. The singer appeared on The Tonight Show with Jimmy Fallon to promote her new documentary, but left the host staggered when she soon rose from her seat and slid herself across his desk.

The bizarre segment began when Jimmy asked Madonna what she hoped viewers would get from her film, to which she responded, “Art is important in our lives. I don’t think people emphasise that enough. I’m really inspired by James Baldwin, the writer. He was a great source of inspiration for the show, and one of the things I quote over and over again in the show is that artists are here to disturb the peace.” She continues, “and so I hope that I have disturbed not only your peace this afternoon but people’s peace while they watch the show. But I mean that in the best way.”

Meanwhile, Jimmy responded, “Oh, yeah, you get in good trouble,” to which Madonna then suddenly rose from her seat and sprawled herself across the host’s desk. However, Madonna is currently riding high on the back of the success of her latest concert movie Madame X, which has received excellent reviews from critics and fans.