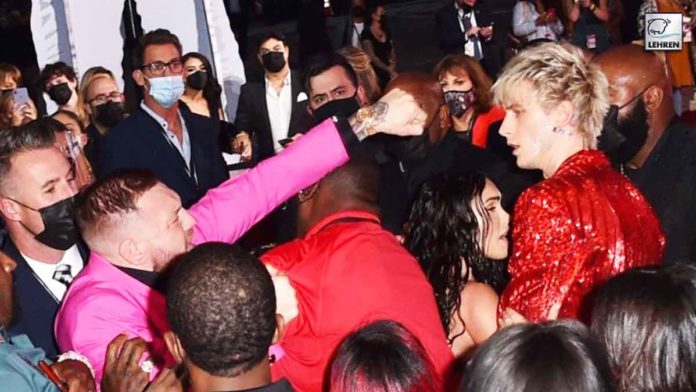 The video captured by MTV Video Music Awards 2021 red carpet attendee appeared to show Conor McGregor lunge toward Machine Gun Kelly. He was shouting at him as security guards held him back.

Rapper Machine Gun Kelly and UFC champ Conor McGregor had to be separated after getting into a physical fight at the recent MTV Video Music Awards 2021, just before the broadcast of the award show at Barclays Center in Brooklyn.

According to People magazine, a source told that McGregor had asked Kelly for a photo, but his request was denied by the star’s team. Later, an eyewitness confirmed parts of that incident, telling Variety that McGregor was trying to approach Kelly, who was standing in line for red carpet photos when the MMA fighter was stopped and pushed by the security of the artist.

Continuing to press forward, Kelly, who was a presenter at the award show, yelled at McGregor with a snarled slur, said a witness. He also noted that McGregor who was walking the carpet with a cane following a recent injury in the ring fell back and dropped his cane. The source added, “He held onto most of his drink, though, yelling something along the lines of that f***g punk punched me.”

Another source from TMZ reported, that “McGregor stumbled, spilled his drink then threw the remainder at Kelly.” The source continued, “Conor went in on it a little bit.” He further noted that McGregor after dropping his cane retrieved it and began swinging it in Kelly’s direction. A source quoted Page Six by saying that “security had to get involved and everyone was screaming. “McGregor was ready to throw fists,” the source said. He added, “Security was having trouble holding him back.”

McGregor’s handlers were requesting him to let it go and it seemed Kelly and his girlfriend Megan Fox did. Soon after, Kelly and Fox were seen walking on the red carpet wearing a Mugler dress for photographers. Before the show, Kelly shared a picture of the couple on Instagram prinkled up for the evening with a sweet caption – I found a mermaid. McGregor, dressed in a pink sports jacket, black frilled shirt, a black pants, walked soon after with his girlfriend Dee Devlin. He was at the MTV VMAs to present the artist of the year award to Justin Bieber.

McGregor spoke with Entertainment Tonight soon after the whole event. He said, absolutely nothing happened and he doesn’t fight with little vanilla boy rappers. When the outlet asked him for details of what led up to the fight McGregor said, “Absolutely nothing. I don’t know. He showed up, and I don’t know. I don’t know the guy.” He further added, “Nothing happened with me, I only fight real fighters, people that actually fight, you know what I mean. I certainly don’t fight little vanilla boy rappers. I don’t even know the guy. I don’t know anything about him, except that he’s with Megan Fox.”

However, Kelly declined to comment on the fight and aggressively covered the mic while speaking to Variety backstage. “We’re not allowed to say,” said Fox. While Kelly’s representative did not immediately respond to a request for comment by Variety, a representative for McGregor denied her client asked the singer for a photo. Meanwhile, the representative of Corner said, “Conor and Dee are in their seats enjoying the show. Conor appreciates all his fans. He does not know MGK other than someone who attended his last fight.”

As per People magazine, a video was captured by a VMAs attendee and shared on Twitter. In the video, it appeared to show McGregor lunge toward Kelly and shout at him as security guards held him back. It doesn’t seem that MGK and McGregor had any prior fight.

At the 2021 MTV Video Music Awards, hosted by Doja Cat, Kelly was scheduled to perform his new song Papercuts with Travis Barker about halfway through the awards show. But it was pushed back to the end of the broadcast just as the stage crew was readying the production. It is unclear till now that why the last-minute change was made, or whether the red carpet fight had anything to do with it.