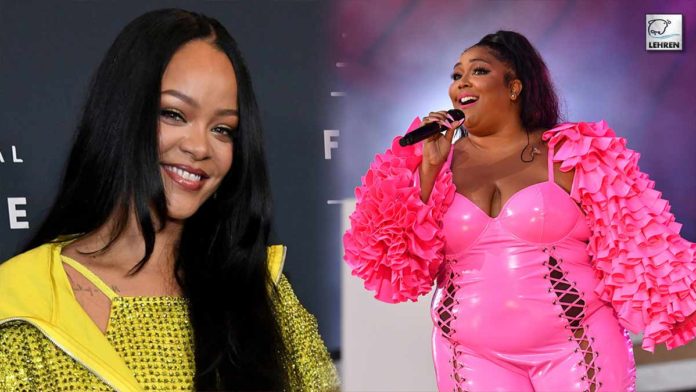 Lizzo paid a visit to the clubhouse on Monday to appear on Watch What Happens Live With Andy Cohen, where she shared something about her intriguing chats with Rihanna.

A fan inquired about a possible collaboration between the two pop artists, as well as when we may hear new Rihanna music. “OK, did the army send you?” Lizzo laughed. “She was like, ‘Yeah, I’ll be a lesbian for a day.'” That’s when Lizzo started talking about her discussions with Rihanna. It appeared at first that their chats were mostly se** in nature, but Lizzo claimed that the topic has become less common since Rihanna gave birth to her first child two months ago.

Speaking of lesbians, Lizzo said, “my conversations with Rihanna are more se**, I guess.” ‘Oh, really?’ Cohen replied. “You talk about s* a lot?” “We don’t talk about s** a lot, but we’re just always giving it to each other,” Lizzo responded. “We don’t talk about work, it’s all play with me. But not since she’s been, you know, mommy. ‘Mommihanna’. So congratulations to her and A$AP Rocky.”

Later, Lizzo was prompted to name a famous person who had “salaciously slid” into her DMs. Although it seemed like there may be a huge list, Rihanna kept coming up. “It’s a lot, but I don’t let them get too far,” Lizzo explained. “You know, they’ll always be like, ‘Man, you playin’.’ ‘Hey, what’s up, Lizzo?’ Like, I always see that, and I see their name. I’ll be like, ‘Not today.’ I would say the most salacious DM I’ve gotten… Rihanna. I think that’s just how she talks.”

Rihanna and rapper A$AP Rocky had their first child together, a baby boy on May 13. During a January outing in New York, the 34-year-old Fenty Beauty founder and ASAP Rocky, 33, revealed they were expecting their first child together. During the city stroll, Rihanna showed off her baby bump by wearing an unbuttoned pink jacket that exposed her stomach. Rihanna seems to be very protective of her baby. She has not revealed the baby’s first photographs as well as his name. A source told Us Weekly that they “have only shared the baby’s name with close family members.”