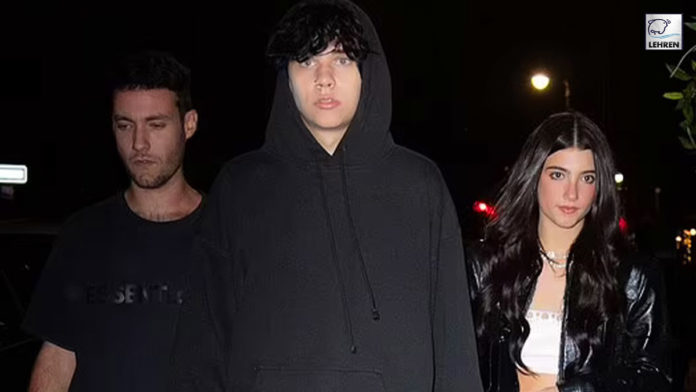 Landon Barker and Charli D'Amelio were caught holding hands in New York just one day after it was revealed that they were dating.

It has been confirmed that Landon Barker and Charli D’Amelio are officially a couple. On June 28, the couple attended Machine Gun Kelly’s concert at Madison Square Garden and were pictured exiting the arena hand-in-hand. For the occasion, Landon wore all black, while Charli sported a white crop top and skirt with a black leather jacket. The 18-year-olds appeared to be a pair as they stayed close to one another on the expedition. Dixie D’Amelio, Charli’s sister, was also with the duo.

The appearance comes just one day after People claimed that Landon and Charli were dating in the “early stages.” Landon was in New York for a surprise performance on stage at MGK’s event, and Charli was in the audience to cheer him on. Landon performed a cover of Travis Barker’s “Die In California” with MGK, who is close with his father. Meanwhile, Travis was taken to a hospital in California due to an undisclosed medical problem. Kourtney Kardashian stood by his side as he was transported out of an ambulance on a stretcher.

Landon shared many videos from the MGK performance on his Instagram Story, but he did not mention his father’s hospitalisation. Travis Barker’s daughter, Alabama Barker, on the other hand, has urged people to pray for her father via an Instagram story, which has the internet concerned about how serious the situation is. “Please send your prayers,” she wrote, along with a pleading emoji. Travis and the Kardashians have yet to confirm what is really going on.

However, before being sent to the hospital, Travis tweeted, “God save me.” This comes only one month after Travis and Kourtney married in Italy after dating for a year and a half. Travis proposed after one year together after the two had been friends for years before being acquainted in October 2020. They were legally married on May 15 at a courthouse, but their larger wedding took place one week later in Italy with family and friends. Their entire family was present for the wedding.