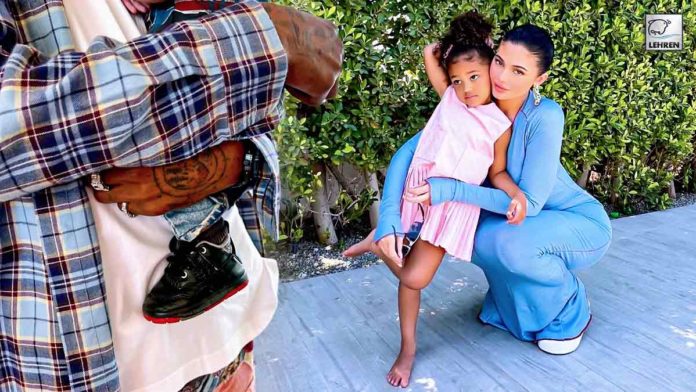 Kylie Jenner shares a glimpse of her newborn cuddling his father during the Easter family celebrations.

In the pictures, Hollywood rapper Travis Scott held his 2-month-old son who was wearing jeans and black sneakers as he snuggled to his dad’s chest. While the face was not shown in the pictures the reality star Kylie wants to keep her newborn away from the light. While in an official announcement kylie said that the name of her son has been changed from wolf and is yet to be disclosed.

Jenner and Scott are also parents to daughter Stormi who is 4 years old now and could be seen hunting for the easter eggs and posing with her mother in other shots. The photos also feature the Easter weekend festivities, with egg painting, and a decadent meal complete with giant chocolate eggs named after Stormi and her cousin Dream.

Kylie posted her picture with daughter Stormi in the backyard wearing a full blue maxi pairing it with white slippers and silver earrings. While Jenner’s little girl looked cute in a pink sleeveless pleated dress and white sneakers.

In the Easter house party hosted by Kris Jenner on April 16, a day before Easter Sunday. Kylie was not alone as her sister Kendall Jenner was in Palm Springs as well as her three half-sisters Kourtney Kardashian, Kim Kardashian, and Khloé Kardashian with their children.  Kim and Khloe Kardashian shared pictures on their Instagram handle from the lavish Easter party showcasing a decorated dinner table with each spot at the table having a giant chocolate egg named after all kris’s grandkids and family members.

Kim Kardashian also joined in and shared a story about the gumball machines. Each gumball had a specific name reserved for one of Kris’s grandkids. The gumballs came in different colors from pink to purple to blue. Kim also filmed her mother wearing a white floral dress. While kris appeared to be occupied.