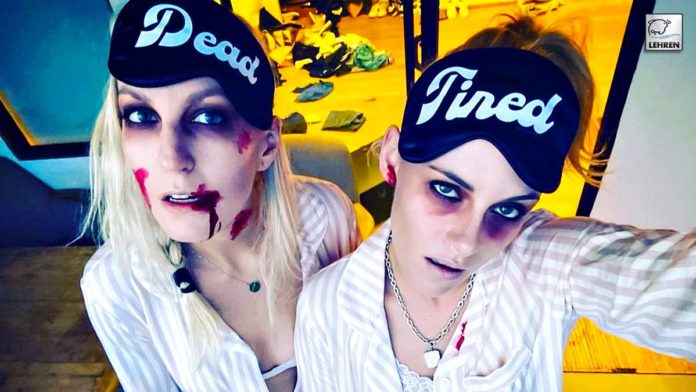 Kristen Stewart is happily engaged to her fiancée Dylan Meyer last year, and now their relationship is getting professional too.

Kristen Stewart got engaged with Dylan Meyer in November and recently, she opened up about her relationship with the screenwriter in an interview. “I love being engaged,” the Twilight star said in an interview with Vanity Fair. “I just feel so happy and lucky.” While Stewart is very much in love, she’s also working with her better half in a professional capacity as well, specifically on developing and writing a television series.

Yet despite this love Stewart clearly feels for her soon-to-be wife, she admitted she was hesitant to begin working with Dylan. “You don’t want that to affect this beautiful relationship you have,” Stewart said. The engaged couple then wrote the first episode in about a week and a half. “Like we discovered a superbrain,’ she joked. ‘She’s a really genuinely brilliant f**king screenwriter.”

For unversed, Meyer and Stewart met on a movie set in 2013 but started dating after reconnecting in 2019. They got engaged last year and what kind of wedding ceremony they plan on having is still up in the air. Though it’s only the middle of February, Stewart’s 2022 is already shaping up to be a great year. The Charlie’s Angels actress was nominated for her first Academy Award earlier this month for her role as Princess Diana in the movie Spencer.

Kristen Stewart reacted to the big news in a statement to Entertainment Tonight, where she began that she wished she could share this moment with her Spencer director, Pablo Larrain. “WOW I wish Pablo and I were in the same country today. I wish I could see his face,” Stewart began. “I am speechless and humbled this morning. I am bowled over by this. I never thought in a thousand years I’d be in the company of these four incredible women,” she said.