Kourtney Kardashian Is Planning To Have Intimate Wedding With Travis Barker? 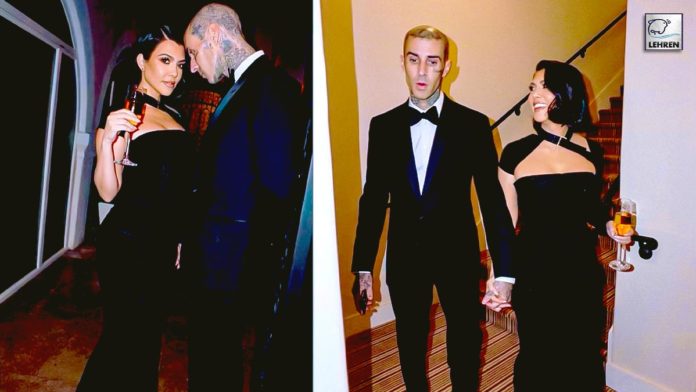 Kris Jenner, Kourtney Kardashian along with their event organizer planning an intimate wedding.

Kourtney Kardashian and Travis Barker got engaged in October 2021. The Blink-182 drummer arranged an elaborate romantic proposal on a beach in Montecito at sunset, complete with a sprawling floral and candle display. The couple was surrounded by a heart-shaped arrangement of red roses as Travis presented Kourtney with a diamond ring.

And now Kourtney Kardashian is planning an intimate wedding to Travis Barker. The 42-year-old reality TV star has reportedly hired event planner Mindy Weiss, who has such a long history with the Kardashians that she did Kim’s first birthday. Recently, a source stated to E! News of the wedding ceremony, “It won’t be a huge event, only close friends and family. The source also reveals the couple ‘want the wedding to happen this year.’

Meanwhile, a different source said to the outlet, “Even though Kourtney would like it to be soon, logistically it’s taking some time,” noting that the bride’s mother Kris Jenner is helping plan. Kourtney’s mom Kris Jenner, Mindy, and Kourtney are all doing it together. The source further said, “Kourtney is relaxed and laid back about the details.” The source also maintained, “She’s not a bridezilla at all.

Travis is also involved, but he lets Kourtney make most of the decisions and wants it to be her day. Mindy is also the event planner behind the massive Stormi World carnivals that Kylie Jenner puts on for her own daughter’s birthdays. “I’ve known Kris for 40 years,” Mindy once told W. “I designed her invitations for her first husband. I’ve known the family, and I helped her do Kim’s first birthday party.”

As considered that party, Mindy said, “Well, Kris did it. I kind of just helped. I think that’s where all the girls get it. She’s so creative and the ultimate party-giver.” Kourtney shares three children, Mason, 12, Penelope, nine, and Reign, seven with her ex Scott Disick, who will be there for the wedding. Travis’ two children Landon, 18, and Alabama, 16, have bonded with Kourtney and whom he shares with his ex-wife Shanna Moakler will also be present.