Kourtney Kardashian And Travis Barker Cross All Limits With Their PDA! 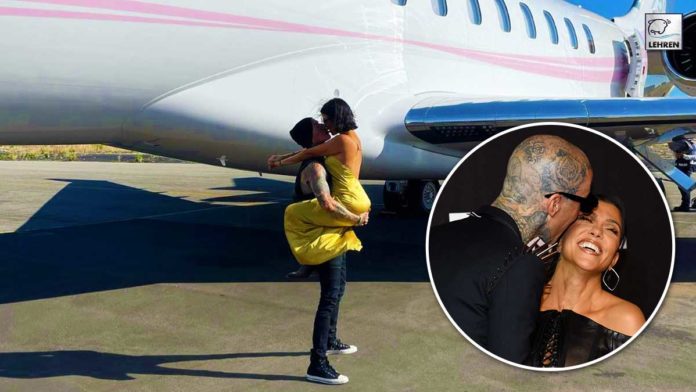 Kourtney and Travis have been making headlines with their PDA, this time, turning more heads at their Lake Como trip! Read ton know more!

Ever since Kourtney Kardashian announced her relationship with Travis Barker, the two have been glued to each other and quite literally at that! The eldest of the Kardashian sisters has been making headlines almost every other day, as she and beau Barker have been painting the two red with their romance. Right from their exotic vacations to their LAs Vegas wedding, the couple even made their debut on the new Hulu show, ‘The Kardashians’, With their peaking romance, and even more peaking PDA, Kourtney has somehow managed to become the most talked celebrity these days.

What’s new is the couple was spotted at Lake Como, but this time their PDA crossed all limits as Travis and Kourtney were seen making out in public. It looks like is the pair just can’t seem to get enough of each other, and often, when spotted on such exotic trips like this one, at Italy’s one of the most beautiful beaches, the couple were seen all over each other.

Kourtney sported a black classic bikini, as she got popped sitting right on top of her lover on the romantic beach. With their pretentious, last moment ‘Las Vegas Wedding’ last month, it almost seems like the couple is perhaps out here in Lake Como, enjoying their honeymoon.

While this isn’t the first time that the couple has served PDA to their fans, Travis had earlier mentioned how Kourtney has become a vital part of his life. He even mentioned how she helped him get over his fear of flying. “I would’ve been forced to be done because I didn’t like to travel or I couldn’t fly or leaving the house didn’t feel good at the time, but never inside was I thinking, ‘ I hate playing the drums’or ‘I hate making music’ or ‘I hate touring.’ It was more like, ‘f–-k, how am I going to do this now?’” he said. “I remember talking to my therapist and he was like, ‘When is enough enough? You’ve done everything. You’ve played the Grammys,’ lists off the people I’ve collaborated with. And I’m like, ‘Yeah, I’m not done yet.'” he said.

While Scott Disick, Kourtney’s ex-partner and father of her 3 kids explained how he’s coping with Kourtney and Travis’ relationship. “Now that Kourtney’s got her life with Travis, like, as hard as it is, it does give me a place to finally be able to move on,” he told.