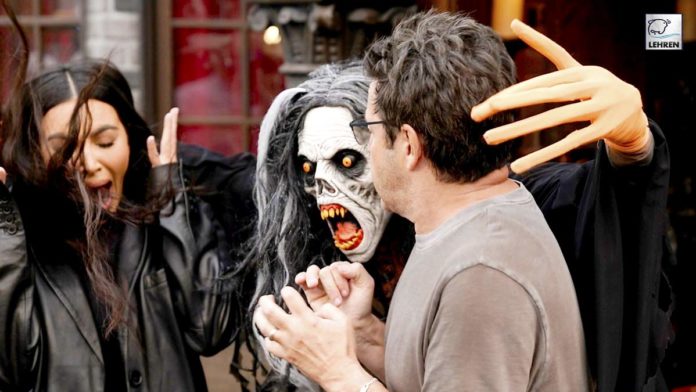 Kim Kardashian encountered her fears during the final Halloween episode of The Ellen DeGeneres Show as she visits a terrifying haunted house with Andy Lassner. While fearlessly braving Halloween Horror Nights with the daytime talk show’s executive producer, the 40-year-old reality star got spooked within minutes as a masked person unexpectedly wrapped their arms around her.

However, despite screaming in terror before even stepping foot in the attraction, she didn’t bat an eye when Lassner bluntly warned her that it wasn’t ‘unusual’ for past guests to get startled. After getting creeped out a few times, the KKW Beauty founder jokingly said, “I need this at my house to scare the s**t out of my children.” I’m really into these,” she said of some of the ghoulish decorations while letting out as many laughs as screams.

The video comes a week after Page Six first revealed that she has teamed up with Ellen’s scaredy-cat producer for the segment. “People outside heard lots of screaming,” a source told the outlet. “Kim was really excited to do it.” Kardashian reportedly came with almost nobody just to ensure that nothing leaked in advance.

The mother-of-four went all out with her own Halloween decorations this year, including going wild with skeletons, webs, corpses, and pumpkins. She also placed a massive plastic spider outside and on top of her $60million home that she built with her estranged husband Kanye West. Kim always decorates her house well to entertain her four children, North, eight, Saint, five, Chicago, three, and Psalm, two that she shares with Kanye.

The kids of the estrangled couple have been living with Kim in Hidden Hills with visits from dad Kanye since Kim filed for divorce earlier this year. Kim has said they are doing well at co-parenting and are getting along. The star often dresses up for Halloween as well. Her costumes from the past include Jasmine, Cher, a skeleton, Little Red Riding Hood, Selena, Poison Ivy, Catwoman, Snow White and a flapper.