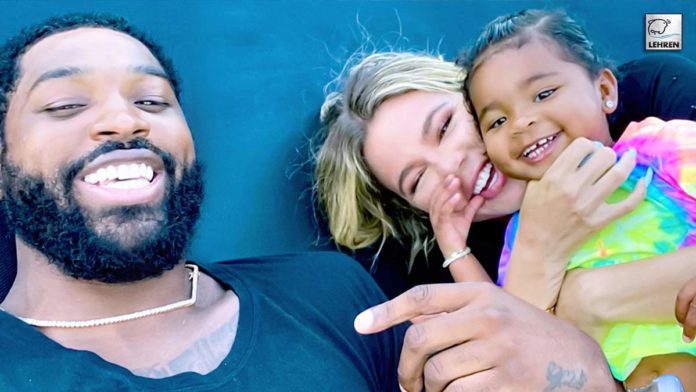 Despite their split, Khloe Kardashian and Tristan Thompson become parents again as they welcomed a baby boy via surrogacy.

Khloe Kardashian, 38, is now a mother of two. According to a source close to Khloe, she and her ex-boyfriend Tristan Thompson, 31, welcomed their second kid, a son, via surrogate, according to Page Six. The new family member arrives seven months after the couple’s divorce. Khloe has not yet decided on a name for her newborn son. On July 13, it was revealed that the on-again, off-again couple was expecting a boy, seven months after their most recent separation.

Kardashian’s representative told Page Six, “Khloé is incredibly grateful to the extraordinary surrogate for such a beautiful blessing. We’d like to ask for kindness and privacy so that Khloé can focus on her family,” the statement reads. Kardashian, 38, and Thompson, 31, are no longer together and have not talked except while co-parenting their 4-year-old daughter, True.

True was born in April 2018, one year after Tristan became a father to son Prince, now five, with ex Jordan Craig. While Kardashian and Thompson divorced in February 2019 due to his many infidelity scandals, they reconnected the following year only for the NBA player to be disloyal again. In court records published nine months later, Thompson acknowledged to having s** with Maralee Nichols in March 2021. “I have the utmost respect and love for you,” the NBA player said on Instagram.

“Regardless of what you may think. Again, I am so incredibly sorry.” True’s sibling was in the works for the pair years ago, according to a source who told HollywoodLife in 2020 that Khloe had been “talking about it for a while now.” Khloe has “never been shy about wanting a big family,” an insider told HollywoodLife in October 2020, during one of the former couple’s several reconciliations.

“She just wasn’t going to do it when things weren’t good with Tristan. He’d love to have one with her as well, but they wanted to get to a place where they were rock solid again.” Despite the fact that they are no longer together, Khloe and Tristan have clearly dedicated co-parents to True. That commitment will definitely be passed on to her baby sister, the youngest of the lovely Kardashian children.