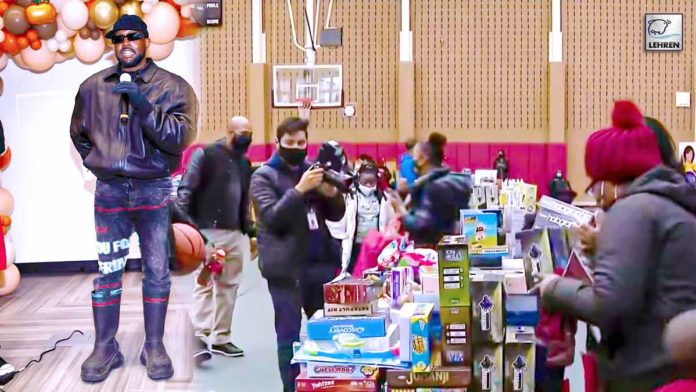 Kanye Ye West also labelled as a 'hometown hero' who is always willing to help with community needs.

Kanye ‘Ye’ West purchased more than 4,000 toys for children in Chicago, that were donated on Sunday. West, 44, contributed to the Toys for Englewood event held at Kennedy King Gymnasium, according to ABC 7 Chicago.

“I’m so proud that Kanye is, once again, responding to our request to help the children of Englewood and beyond,” Stephanie Coleman, who is Alderman of Chicago’s 16th Ward, told the station. Coleman added, “He is no stranger to our community. His presence has always been felt in our neighborhoods and he loves visiting, but this Christmas he has truly been our modern-day Santa Claus.”

Meanwhile, Coleman stated to WGN-TV that West is a ‘hometown hero’ always willing to help with community needs. “We want to thank him for understanding that children in Englewood, and on the South Side and in Chicago in general, some will be without this holiday,” Coleman told the station. “Some are without their fathers due to gun violence, due to mass incarceration, so today, we are here being a blessing.”

However, others who contributed to the event included Andre and Suheir Williams, owners of the S2 Grill Express restaurant, multiple aldermen, and community figures, ABC 7 Chicago reported. West late last month appeared at the Los Angeles Mission to deliver 1,000 meals to Skid Row ahead of the Thanksgiving holiday. “The narrative God wants is to see that we can be redeemed in all these relationships,” the Grammy-winner said, according to Page Six. “We’ve made mistakes. I’ve made mistakes.”

Kanye Ye West, who appeared alongside Rev. Troy Vaughn at the mission’s annual Thanksgiving event, ‘had never been there and wanted to see everything going on,’ and ‘talked about saving the world and how he had all these ideas to work with LA Mission,’ a source told the outlet. With his acts of kindness, the rapper is said to be “not giving up” on his marriage to Kim Kardashian despite the reality TV star filing for an immediate end to their relationship. It was reported earlier that Kim, 41, insists there is no way back for the couple and has requested to be “legally single” with immediate effect.