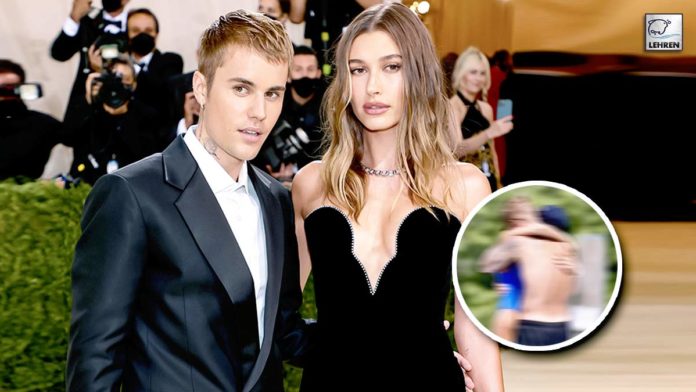 Justin Bieber and Hailey Bieber were seen relaxing on the deck of the boat and showering each other in affection as they kissed and hugged.

Justin Bieber and his better half Hailey Bieber couldn’t keep their eyes away from each other as they enjoyed a very steamy and romantic vacation in Coeur d’Alene. The singer and the supermodel shared passionate kisses and cuddled while soaking up the summer sun on a boat with friends.

Justin, who recently paused his Justice World Tour for health reasons, showed off his array of tattoos as he went shirtless. The couple were seen relaxing on the deck of the boat and showering each other in affection as they kissed and hugged. Later in the day the model removed her hat and jumped into the lake, emerging with slick wet hair afterwards. Justin is currently taking time off from a busy tour schedule as he recovers from Ramsay Hunt Syndrome, which temporarily paralyzed half of his face.

However, the singer appeared to be doing much better as he lapped up the sunshine with his wife, whom he married in 2018, by his side. Bieber also took to his Instagram and share three images of the beautiful scenic vacation. One of the snaps is the up-close look at his wife as she stretched out on a white leather backdrop, showing off her tanned skin.

In the photo, Hailey rocked the trendy new ‘glazed donut’ manicure in a nude shade on her almond-shaped nails. Hailey wore a necklace that spelt out ‘Rhode’, her middle name and skincare brand moniker, in charm letters. Bieber is enjoying his vacation for the last few days. Previously, he was photographed smiling at Idaho.

The singer was seen in high spirits while on vacation in Idaho, as he was accompanied by his wife Hailey Bieber, a longtime friend and mentor Usher Raymond, and pals Jason Kennedy and his wife Lauren Scruggs. While enjoying a much-needed break with his wife and friends, it seemed as though the musician is now showing vast improvement as he flashed a grin and appeared animated while talking amongst the group.

While on his day of fun in Idaho, Justin was seen wearing fluorescent yellow shorts while Hailey looked stylish in a blue bikini top and matching trousers. Proving that he’s back in good health, the Baby singer put on an animated display as he enjoyed a ride down an inflatable slide. Later he was seen hugging his pal Usher, who is credited with helping make Justin into the household name he is today.